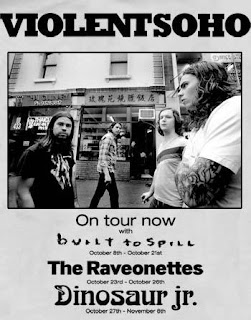 It is not often that one goes to a concert just to check out the opening act. In fact it almost never happens, but the Australian post grunge quartet of Violent SoHo, who are making waves in their native country and across the globe are on their first official US tour in support of Built to Spill, The Ravonettes and Dinosaur Jr. Last night was one of the first stops on the Built to Spill leg for the boys and the first of four nights in New York City. I have been hearing a buzz about Violent SoHo for months after I was introduced to the band from Patience Hodgson of The Grates and I loved what I herd and kept an eye out for the band. It is not everyday that a band from Australia comes to the US, so I was able to get a couple passes to the gig last night and was blown away. From the second the band walked on stage, they looked like Mudhoney and from the first note I felt as if I was transported to Seattle circa 1991 at the height of the grunge era. I loved every second of it! Their songs are loud, in fact very loud, fast and most under three minutes therefore the 30 minutes the band was on stage, they were on fire. The small amount of people inside Webster Hall were really into the band with most, if not all, never hearing of them before.
After the show I had the opportunity to speak with singer Luke Boerdom after being introduced by the band's rep, Luke was so grateful to be playing and was thrilled to have had such a good response from the crowd. When I asked him what it was like touring with Built to Spill he said "Its a dream, they are huge and very well respected where we come from, so to be opening for them is just awesome. They are great guys, lending us gear, giving us beer, letting us eat their food. It's been pretty awesome." Such a humble guy and one would never guess after he was just screaming his lungs out on stage. Violent SoHo are a band not to be missed, you know the style of music because you grew up with it, no matter how artsy rock and roll is these days, they still take you back to a place you still love and keep the momentum alive.

Stay tuned in the coming weeks as I do a full on interview with Luke. Special thanks to Luke and Nicole Garvey for everything.
Posted by Salvatore Bono at 4:45 PM