Movie of the Month - Seven 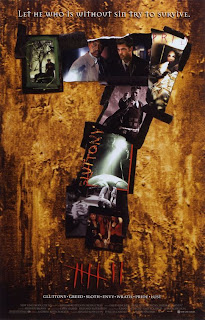 After all these years, no matter how many times I have seen this film, it is still one of the best psychological thrillers ever. The 1995 thriller, Seven, director David Fincher (Zodiac, Fight Club) made his biggest splash in the film making world with this classic. Fincher. Starring Brad Pitt, Morgan Freeman, Gwynth Paltrow and Kevin Spacey, Seven is the story of a young detective (Pitt) and a vet on the force (Freeman) who team up to solve a string of murders based around the seven deadly sins. Fincher, who was troubled with the business after being frustrated and bothered during the filming of Alien 3, didn't read this script for almost a year and a half. After reading the script and being blown away by the idea of a connect-the-dot style thriller, not a who-done-it? Being inspired by The Exorcist, Fincher brought a level of fright, violence and horror when crafting this piece. Seven is film that will keep you guessing and going for its 128 minute run and only leave you begging for more. As the Halloween season approaches this month, Seven is one to see and revisit.
Posted by Salvatore Bono at 8:43 AM