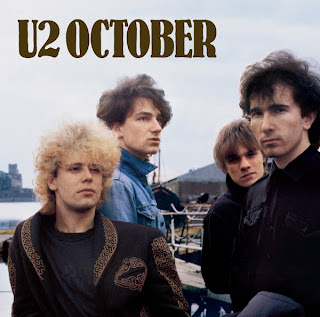 The idea, of course, to showcase this record this month was fitting for the title of the album. However, there is much more to it. Refusing to submit to the sophomore slump, the Irish quartet know as U2, proved they can still roll out hits before they started singing anthems. October, the bands second album was released in 1981 made the band crack emotionally and internally. U2 started off as a punk band that were not chanting about rebellion, but about holding on to innocence. October was the record that saw them holding on to their innocence with all they had left, dabbling strongly in religion and trying to live up to the hype and pressure of showing they could do more that just "I Will Follow." In the studio with producer Steve Lillywhite, Bono would be making up lyrics as went along. The band was in turmoil as bassist Adam Clayton wanted to party and live the rock and roll lifestyle, while the others attended scripture classes and wanted to be one with God; this was all featured on songs like "Gloria," "With a Shout (Jerusalem)" and "Rejoice." Though the album didn't make much of splash in the US, it did fairly well in the UK and led to what would be War, the bands first international success. October is a record that is gloomy as it is dreamy, heavy as it is light, remembered as it is much forgotten.
Posted by Salvatore Bono at 8:25 AM