This is a pretty great way to honor icons, the UK's Royal Mail will feature iconic British album covers on their stamps next year. Here is who they will be placing...Pink Floyd's The Division Bell, Coldplay's A Rush of Blood to the Head, Blur's Parklife, New Order's Power, Corruption & Lies, Rolling Stones' Let It Bleed, David Bowie's The Rise and Fall Of Ziggy Stardust and the Spiders From Mars, Primal Scream's Screamadelica, Led Zeppelin's IV, Mike Oldfield's Tubular Bells, and The Clash's London Calling. Interesting enough, they picked Mike Oldfield over let' say, umm... THE BEATLES!?! Or England's favorite son's Oasis, and Joy Division's cover for Unknown Pleasure's is pretty great.

This news kind of blew my mind today. The Flaming Lips are set to do a track-by-track cover of Pink Floyd's Dark Side of the Moon. The reinterpretation will feature guest spots from Henry Rollins, Peaches, White Dwarfs and Stardeath. No word yet on when the record will arrive.
Reps for Amy Winehouse have confirmed the fallen singer will be back in 2010 with an album of new material. Winehouse, who has suffered a drug addiction battle since coming into the spotlight and has been a favorite target of the tabloids, has been recording with various producers including Mark Ronson who was the master mind behind her breakthrough Back to Black.
Living Colour front man Vernon Reid has received a special honor from New York City Mayor Mike Bloomberg. Reid was this year's recipient of the Mayor's Award for Art and Culture. Congratulations to Vernon!
Not only did he write and score some of Wes Anderson's latest film, the animated Fantastic Mr. Fox; Jarvis Cocker will also appear as a marionette in the film as well. Take a look below. 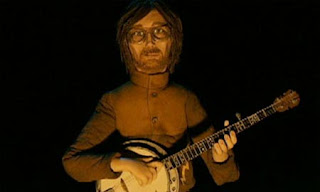 Posted by Salvatore Bono at 3:12 PM