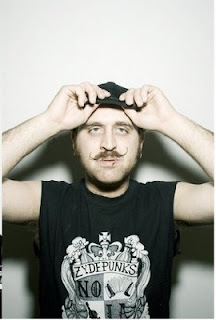 Franz Nicolay is not just your average musician. He is a wanderer, a gypsy and a creative force that is not to be overlooked. Nicolay, who is better known as the handsomely mustached piano player for The Hold Steady, has been in a number of bands playing a number of different styles of music. From the indie rock outfit of World/Inferno Friendship Society to the Gypsy punk band Guignol to his solo material that is getting him rave reviews. Of all the bands he has played with and songs he has played on, Franz has one key to his success--having fun. His solo debut Major General, was released earlier this year, and is currently prepping a book of short stories, plus his constant touring schedule with Hold Steady, Franz shows no signs of stopping. Just before he went off to the UK with Hold Steady for a massive tour, that will also see him play a slew of solo dates, I had the opportunity to speak to the man behind the keys and sassy mustache. Take a look at my interview with Mr. Franz Nicolay below...

As a musician in Brooklyn, what kind of effect has New York City had on your music?

There are many cities with good, even great, music scenes; but New York is one of the few that has many great scenes existing simultaneously and independently - so I can be, for example, a part of the new-music scene with Anti-Social Music, the Balkan thing with Guignol, and the punk scene with World/Inferno with virtually no crossover - but there are all kinds of ambitious musicians doing similar things, so each of us has a broad palette of sounds and styles at our fingertips.

The make up of the band is so diverse; do you think the Hold Steady is the perfect symbol that New York is a melting pot?

I would disagree with that; the Hold Steady is a pretty homogenous group personally and musically: upper Midwest dudes who like Budweiser and classic rock. Then I'm the wild card.


From World / Inferno Friendship Society to Hold Steady to Guignol and your solo work, each act has a different style and sound. How do you find the balance from playing one type of music to another?

I prefer to think of it as finding the connections: all four projects share a quality I think of as "intelligent hedonism"; a genuine message and deep content swaddled in populist entertainment.

The Hold Steady has brought you to some pretty great heights, from selling out every show you play to opening for The Rolling Stones. What has your experience been like playing in that band? What has your favorite / proudest moment been with them?

I'm far better at playing in the keys of A, D, and E than ever before. I've learned to appreciate the Thin Lizzy and ZZ Top catalogues, but not Led Zeppelin. I know infinitely more lawyers than I used to, since previously I knew zero lawyers. I can parallel-park a 14-foot box truck and have a favorite all-you-can-eat Thai buffet in Islington.

You didn’t play on the Hold Steady’s debut, Hold Steady Almost Killed Me, was it odd joining up with the band to record Separation Sunday? Was it supposed to be a one album deal and then turned into a beautiful friendship?

I did play on Almost Killed Me, as a guest on three songs. After that, I joined them in live shows for those songs for a year or so. Then Tad said, "Hey, we're starting work on a new record, do you want to work on some songs with me?" Then a month or so later, "Well, do you just want to join the band?" At the time, I was already in three bands, so what's one more?

What was the need to do a solo record?

I write a lot of songs, and not all of them find a home right away. And sometimes I get offers to do shows and don't feel like wrangling a bunch of other musicians...


You called your solo debut, Major General, is this in reference to someone or something?

I'm the very model of a modern major general.

Will there be more solo ventures in the future?

Yes, I have a 10" vinyl EP called St. Sebastian of the Short Stage coming out on Team Science Records at the end of September; it includes a cover of Jonathan Richman's "New England" I did with the Dresden Dolls; also the world's first mariachi-disco tribute to a retired superhero.

Is it a bit odd going from bigger clubs and festivals with Hold Steady then going to smaller places opening for certain artists on your own?

Not at all - variety is the spice and all that. Big clubs make you feel like a rock star but it's hard to perform as well when you can't smell the sweat of strangers.

Does anyone from any of the plethora of bands you have worked with guest on stage with you or on your album?

You have lent a hand arranging music for various bands. How did you end up working with Australian punkers The Living End?

John Agnello, who produced Boys & Girls In America and Stay Positive and mixed Major General, was producing their record and asked me. The Living End have very attractive guitars.

Burning Question: Every time I see you on stage you are throwing back a bottle of wine. What kind of vino are you drinking?

Riojas and malbecs preferred; anything with a tempranillo grape. Spicy!

Hold Steady Video for "Stuck Between Stations" (Below)


Special thanks to Franz Nicolay for the interview!
Posted by Salvatore Bono at 7:13 AM