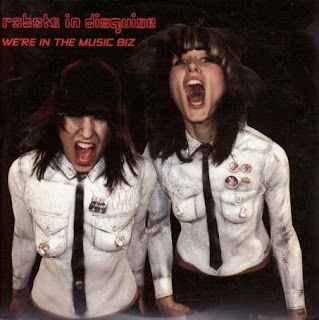 Before Lady Gaga was dressing up in avaunt-Gard outfits and singing about sexuality over a dance beat, England's dynamic duo of Robots in Disguise were doing that before Lady made the world go Gaga. The British electro duo, now based in Berlin, got their start on BBC comedy series The Might Boosh, which finally made its way onto DVD in the US this past week. Robots in Disguise are comprised of two clever females; Sue Denim and Dee Plume. These spunky and sexy two women have taken Europe by storm with their crazy live sets and wicked sound, I had the chance to speak to the ladies as we discussed their style and sound, The Mighty Boosh, recording and a possible fashion line. Take a look at my interview with Robots in Disguise below..


What have Robots in Disguise been up to lately? It has been rather quiet on the RiD front in 2009.
Sue: We are in the tiny live room of Jon Marsh from The Beloved (smash hit UK dance act of the 90s!) writing songs for album 4.


You were originally a band from Liverpool and are now based in Berlin. Has the change of cities and countries changed you style and sound?
Sue: We're based back in London again now. Well obviously we went from sounding like the Beatles to sounding like Peaches with the move from Liverpool to Berlin.. ok yeh I'm joking. We still sound like us but yes I guess the different places do have an influence. We wrote a song mentioning Liverpool on the first album (Boys), we've sung about London (Outdoors, Postcards From), and Berlin (I Live In Berlin). Album 4 will be back to the London Robots In Disguise sound.


What has England and Germany offered you creatively that other places have not?
Sue: Berlin offered us the sauna on the Spree which has yet to be matched anywhere else. Getting real hot and sweaty helps the creative juices flow. That is if you don't fall asleep.


Sexuality and being provocative have always been a staple in your style and sound, explain why this is?
Sue: Because we are hot bitches! Ha ha. I don't know. We're just human, and sexual of course. Sex and sexuality is of huge importance in life. Some of the provocation is just incidental, some of it deliberate.


You seemed to have been one of the first female fronted girl groups of this decade to use sexuality and simply being yourself in what you do. With so many other's now like Lady Gaga and La Roux, how do you feel about them casting a shadow over what you were doing first?
Sue: I don't really think about it except occasionally when people say 'Haven't you noticed Lady Gaga's make up looks like yours did 5 years ago' then I'm like 'Oh yeh' .. but because we're not doing that right now it is totally irrelevant and anyway their music is really different from us. They're women out there in a man's world, so good for them! Solo female artists are not really in the same arena as us - we are trying to corner the 'girl gang' end of the market.


Who came up with the idea for the cover of your last record, "We're in the Music Biz?" What seems to be you ladies innocently wearing dress shirts and ties is certainly not the case, it is you nude wearing perfect body paint. Did you ever think anyone would notice? Were you ever afraid of being censored?
Sue: We came up with it of course! We wanted to do something cheeky and also a little aggressive, and to make a statement about women in the BIZ (note the body painting is the uniform worn by your average boy indie group). We were inspired by the Slits album cover for Cut. We also happened to find a really good body painting artist in Berlin so that helped. Talking of whether people notice or not, it is really a double take thing. The evening after we'd done the shoot, we went out to White Trash in Berlin and walked down the street and were in the club 'dressed' like that. It was very funny.


Your image is very unique and elaborate, have you ever thought of starting your own fashion line?
Sue: We were talking about this recently in fact. Watch this space!


You got your start from the British Television show The Mighty Boosh. Have you ever thought about returning to TV?
Sue: Yes, we've thought about it. There was a reality-cum-fantasy TV show discussed with MTV at one point. Maybe we'll do a kind of musical Ab Fab in 20 years.


When can the US expect RiD to land and invade?
Sue: Maybe next year? I really don't know, but we wanna!!!!!!!

DEE: 2010! Yes siree we are gonna rule the school (the school being the US of A) with our totally amaze-zing new record ;)


Special thanks to Robots in Disguise and Rob at Robot Control for the interview!
Posted by Salvatore Bono at 8:13 AM