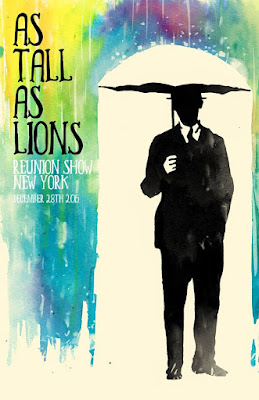 Exactly five years ago this month, at the peak of their career Long Island alternative rockers As Tall As Lions played their final shows in the U.S. at Highline Ballroom. They were, at the time, dubbed farewell gigs and the band, who earlier that year played Coachella and the year before released their acclaimed third record, You Can't Take It With You, were gaining the success they had once dreamed of. After years of touring and opening for bands like Sparta, The Receiving End of Sirens, Silverchair, they were finally becoming headlining acts themselves. Playing Jimmy Kimmel Live! and touring Australia, the band from Long Island looked as if the future was bright, then it went dark.

Read Our 2009 Interview with As Tall As Lions

During the hiatus, members of the band continued in music. Singer Daniel Nigro started a band called Blocks but also went on to write with Sky Ferreira, Billy Idol, Kylie Minogue, Twin Shadow, Carly Jae Respen, Kimbra, among others. Drummer Cliff Sarcona and bassist Julio Tavarez formed The Black and The White.

After the five years apart, which was due to an amicable split, the band announced a series of reunion gigs in Los Angeles and New York. Following two successful and sold-out nights at LA's Teragram Ballroom, they returned back East and opened their New York shows on Monday at Webster Hall.

Read Our 2008 Interview with As Tall As Lions

Just after 9pm, the band walked on stage to a heroes welcome as they opened with "Stab City" and it was as if they never left. Backed by an additional horn section, the five members of As Tall As Lions roared again. Jumping into "Be Here Now," they focused on their 2006 self-titled sophomore release early on but with three albums under their belt, they pleased all fans of every era of the band in the room. Songs like "Circles" and "Into the Flood" made it into the main mix.

As their families watched proudly from the balconies, the band sounded better than ever. It may have been five years since we last saw and heard from them, but the love is still there. Each member played with a smile on their face and soaked up every second. As the lights dimmed from the main set, fans would not walk away until they heard more.

For the two encores they had, they focused on songs from their other releases, 2004's Lafcadio and their final album. Songs like "In Case of Rapture," "Maybe I'm Just Tired," "Break Blossom," "Lost My Mind" all felt as if they were being played for the first time, again. Each song had a new spin and a new appreciation for it. Maybe it was the length in between them leaving and coming back? Maybe it was taking a step back and realizing how good their music was? Maybe it was because after all these years, the tunes still mean something? Whatever answers fans were looking for at these reunion concerts could be questions they will seek out for years to come, but one thing is for sure, if this is the building blocks for something more, then As Tall As Lions are laying a thick foundation.

Closing with "Love Love Love (Love Love Love)" the room lit up as fans sang back the lyrics louder than Nigro could sing them. They sang them with love and affection. Welcome back.
Posted by Salvatore Bono at 9:26 PM