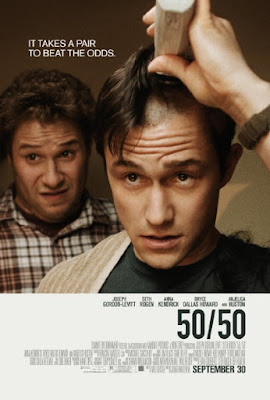 Sometimes we need to laugh in the face of darkness and nothing captured that mood more than the 2011 film, 50/50.

The film, which stared Joseph Gordon-Levitt as a man in his late 20s, early 30s that is diagnosed with cancer. While the news hits him like a ton of bricks, he relies on his friends like Seth Rogan for support. The film shows his ups and downs as he fights a disease that is all too real for many viewers as they have or know someone close to them that has battled the horrendous disease. With a supporting cast that includes Bryce Dallas Howard, Anna Kendrick, Philip Baker Hall and Anjelica Houston, 50/50 might be a hard movie to watch this Christmas but one that is necessary as it shows the gifts we all have around us and how some days are harder and often times, better, than others thanks to the company we keep.

As Rogan and Levitt reunite this season on screen with The Night Before, their first outing together was not only poignant but touching.
Posted by Salvatore Bono at 4:52 PM