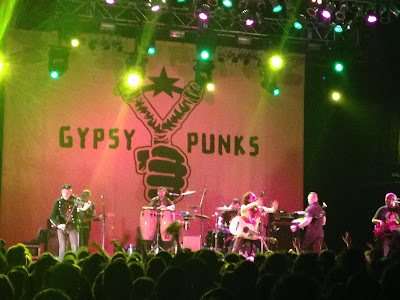 Gypsy punks Gogol Bordello kicked off their annual end of the year stints at Terminal 5 on Wednesday night. The band, who performed a 'typical party' on Wednesday was in preparation for their big New Year's Eve concert at the same venue where they will celebrate the 10th anniversary of their 2005 breakthrough, Gypsy Punks: Underdog World Strike!

As the 10(ish) members of the band hit the stage at 9 p.m. and the giant banner of Underdog World Strike's cover began to raise behind them, celebrating the end of 2015 and kicking off 2016 came early for those in the packed house.

The band, fronted by Eugene Hutz, must burn off thousands of calories a night as they swing around the stage, dancing, jumping, screaming and performing as if it is the final time they will ever be in front of a crowd.

With a variety of percussion and guitars being played, not to mention accordions and a violin,  this was a musical party unlike any other.

Using fan favorites like "Wonderlust King," "Start Wearing Purple," "Think Locally, Fuck Globally," and the ode to the 2003 New York City blackout, "Avenue B," the band had fans jumping and dancing for the two hours on stage.

As the confetti from cannons came down on the audience like the rain outside the venue, as the clock struck 11, Terminal 5 told the band their night was done.

"We had another for you but they won't let us fucking play it. So, that is it," Hutz told the crowd who proceeded to boo the venue. As the sweat-soaked fans walked out of the place, they found an indescribable way to end the year.

While they take their roots in Balkan, Brazilian, Mediterranean and British punk, they are a band that once called the City that Never Sleeps home and a perfect match for the cultural melting pot of this city. If there was ever a band to see in the Big Apple, Gogol Bordello are truly it.
Posted by Salvatore Bono at 11:31 AM