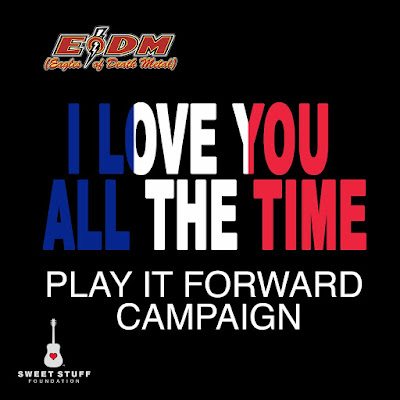 In the wake of what happened to Eagles of Death Metal at Le Bataclan in Paris last month, the band said that any artist covering their song "I Love You All the Time" will donate all proceeds to their charity, The Sweet Stuff, which will go to aid the victims of the tragedy. Now, artists like Florence and the Machine, Kings of Leon, Savages, Alain Johannes, Jimmy Eat World, My Morning Jacket, and others have all covered the song which is now on streaming services. The services will donate all streaming profits to the charity as well.
In a press statement EODM's Josh Homme said: “I made a plea to artists and business people alike to come together to use our solidarity as proof that we are stronger together, and that we can make a difference. We are proud to be a little part of such a big group of talent and good will. We can’t thank these artists enough for their donations of talent, love, time, and compassion. Now, the Play It Forward Campaign is in the hands of the fans to help us make a difference, and to help those affected by this tragedy. Please listen, purchase, play, and enjoy – and know that every time you do, you’re doing the sweet stuff that makes that difference.”

Nine Inch Nails' Trent Reznor has confirmed that the band will release new music next year. He tweeted


The late Scott Weiland's cause of death has been revealed. According to TMZ, he Hennepin County Medical Examiner revealed that he died of an overdose of cocaine, MDA and alcohol as well as having heart issues and asthma were contributing factors.

PJ Harvey will release her new album next spring. She made the record in public spaces in Kosovo, Afghanistan, London and Washington, D.C.
Posted by Salvatore Bono at 3:50 PM