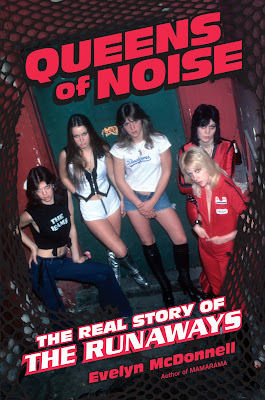 For a long time, women in rock and roll was a taboo topic. That all changed when The Runaways took the late 70s by storm. Instead of being girls that wanted to be around the boys playing music, they wanted to be like the boys playing music. With a mix of garage, punk, and rebellion, The Runways became not just pioneers to females around the world but queens of the rock world. In 2013, author Evelyn McDonnell told their story in Queens of Noise: The Real Story of The Runways.

Queens of Noise is the first book to tell the tale of Joan Jett, Sandy West, Cherrie Currie, Lita Ford, Jackie Foxx from start to finish. Thanks to new interviews, extensive research and fantastic reporting, McDonnell gives the definitive story of how and why The Runaways came to be. For any fan of this band or one of music in general, this is one to read.
Posted by Salvatore Bono at 4:59 PM