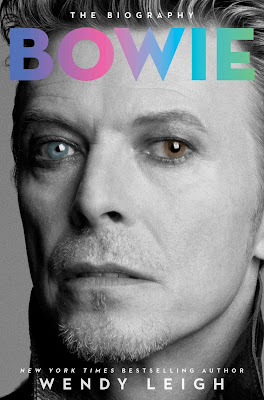 As the world will hear the final recordings from David Bowie on the Lazarus soundtrack, we look into a book that dives deep into his tabloid making, androgynous sex life. Released as a paperback in the weeks after his death earlier this year, author Wendy Leigh explores the side of Bowie that was not heard in song but only in imagination. She takes a close look as to how the man named David Robert Jones became David Bowie and the people that inspired him along the way. She also explores the sexual conquests of the singer that had followed him for years prior to his marriage to Iman.

Bowie, the biography, is a book unlike any other about the star. After combing through archival interviews and conducting her own for the book, fans read about a Bowie they never knew. They read about the man who was a father of 2 but also worked around the clock making his art. It is one of the far more interesting and insightful looks about The Thin White Duke.
Posted by Salvatore Bono at 5:29 PM