Speaking to Radio X, Liam Gallagher revealed what is holding up an Oasis reunion -- his brother Noel. The frontman said: "This is a serious question and I’m not bringing the mood down. Our kid's going around like I've stabbed his fucking cat. He wants to be in a solo band. If people think me having a dig on Twitter is what’s stopping the band getting back together, they’re mad. If they want the band to get back together they’ll have to ask our kid. It’s down to our kid. When you're a little geezer and you've got small man syndrome, you need that fucking like 'no, yeah, no' [attention]. People keep asking him 'when's the band getting back together?' and he's going 'Never' because he can carry that whip, but I think the minute people stop asking him, he'll go 'fucking hell, what? Are they getting bored of me now?' So then he'll get the band back together. So don't fucking ask him any more.”

To celebrate the 20th anniversary of their acclaimed record, Black Love, The Afghan Whigs will be releasing a special deluxe edition of the album for Record Store Day.

Phil Collins has announced a handful of 2017 live dates and the musician says he is open to another Genesis reunion. He said at a press conference Monday: "I wouldn't want to do anything that lasted six months or a long time. But I wouldn’t rule out doing something."

After the hype of getting 3 records this year from Lupe Fiasco, it doesn't look like that is happening anymore. In a series of tweets, he said:

Gracias...just to clarify tho the albums have been done for months. It's the red tape & details now. The shit I hate... https://t.co/SnuFVLafCI
— Lupe Fiasco (@LupeFiasco) October 16, 2016


Fleet Foxes frontman Robin Pecknold took to Instagram to announce that his band's upcoming album might take longer to make than expected because he is working on a solo album.

FF record kind of crazy / vast so working on "putting babies to sleep / living my truth" palliative solo album on off days
A video posted by Robin Pecknold (@robinpecknold) on Oct 16, 2016 at 12:23pm PDT


Rockers Radkey will release their new album Delicious Rock Noise in November. Take a look at the cover, below: 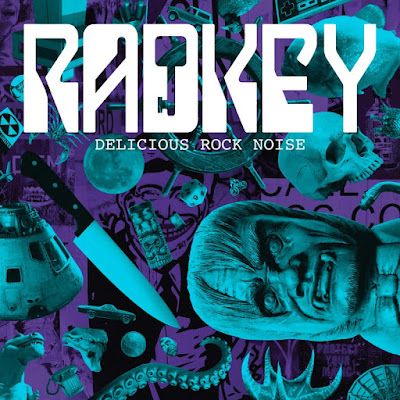 Posted by Salvatore Bono at 5:52 PM