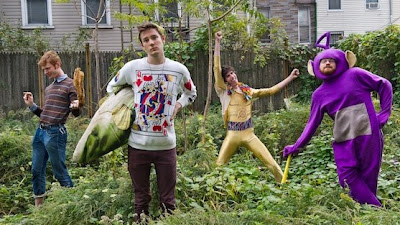 In June we named Reptar our Rising Artist for that month, in August we saw the band blow everyone away at Lollapalooza and release their debut EP - Oblangle Fizz Y'All. Now, Reptar have gained the momentum and popularity that will bring them right into the new year with a bang. As 2012 peaks its head around the corner, we predict Reptar are going to be one of the break-out bands of next year. The Athens, Georgia quartet just know how to have fun and not take themselves too seriously and with this philosophy, Reptar will have the success they are yearning for. We spoke with guitarist, Graham Ulicny about the bands roots, discovery and being an Athens band. Take a look at our interview with Graham below:
Hailing from Athens, Georgia and having such magnificent music always come from that city, do you feel any pressure to live up to any expectations, due to the city’s legacy?
Well personally I don't feel pressure. Making music is not supposed to be a competitive thing. I think seeing other great bands can really aspire people to write and practice and stuff but in the end everyone must do their own thing. Athen's is a cool place to be in a band and we have been really lucky to meet the musicians that we have.

Has Athens influenced you as a musician, as a band?
I think the people there have. Like I said, I feel really lucky to have participated in the music scene there. It's very nurturing for young bands I think. There is obviously a lot of music that has come out of Athens that I love, but I couldn't begin to trace how that has influenced the music we make. I guess we started out playing a lot of house shows. That definitely has had a big effect on our energy onstage.

Who is your favorite Athens band?
Fuck. I can't answer this. Seriously I just can't. Check out Powers, Bubbly Mommy Gun, CoCo Rico, Quiet Hooves, Grape Soda and New Sound of Numbers. There are so many more........

You linked up with Ben H Allen, who took notice of your music. How did he hear about you?
He came to one of our shows and really dug it. He was waiting for a friend at a bar and stumbled in to the Drunken Unicorn where we were playing in Atlanta. He came up to me after the show and asked if we wanted to record some stuff.

Your music is very exciting and different than most bands out there today. NME calls it “cartoon acid – wave,” not exactly sure what the means but how do you classify or define your sound?
I like that description. I like the fact that people have a hard time pinning our music down. It means that at the very least we are being creative. I think we are too young for a genre right now. I guess I'd say: we'll see.
The band is rather young, how long have you been together?
We played our first real show in May of 2009. We lived together over that summer and wrote a lot of our first songs.
You received a ton of buzz at this years SXSW festival, what is it like to be one of the buzz bands to come from that experience? How was that experience for you?
SXSW was a fucking trip. The first year we went, no one knew who we were. Honestly, the showcases are kind of a let down. You see a lot industry people who show up at shows because it's their job. A lot of tweeting and other silly shit like that. The best part for us is getting to hang out with new friends and friends we've made in other citys. Our shows went well though for the most part. Our best show was a house party we played at our friend Ramona's house. We played on the back of her neighbor's flatbed truck and had a bonfire. It was really nice.

Prior to SXSW or CMJ showcases, your live shows have gotten you so much attention. What are you doing that is making you the talk of the town?
Well I'm not exactly sure. All I can say is that we fucking love playing music for people. Nothing in the world makes me happier than playing music for people and when they dig it there is this connection that is just incredible. We just want people to have fun and maybe have an intense existential experience. We are constantly trying to make the musical aspect of it better. Other than that we just have a lot of fun.
You take your name from the Rugrats cartoon character (very awesome), any other pop culture references that you love that we should know about?
Pacman eating handcuffs, eating a pizza.

How much fun are you having doing this and performing with this band?
Words fail. It's incredible to be able to share our music with people. That's why people play music in bands.
Are you working on a debut album?
Yes, we are currently finishing writing songs for a full length. That will be out sometime early next year (vague enough?).
How would you describe your band to someone who has never heard of you before?
It's like being stranded on an alien planet without food or water. You are really bummed out at first but then you find a race of sentient being who proceed to throw you a pizza party and hand you an instant orgasm orb like the one from that Woody Allen movie.