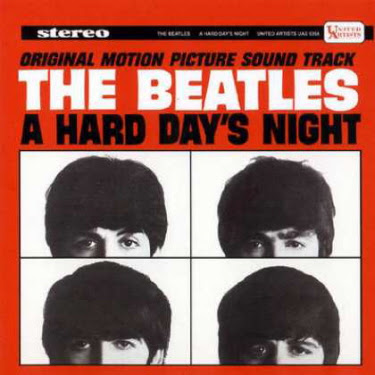 1964 - the year the biggest band in the world got even bigger. Hard to imagine, but if there was a way for The Beatles to create more of a movement in pop culture as they were already on the quick rise to infamy, it happened in 1964. The Fab Four starred in their very first film, A Hard Days Night, a story that pretty much is more documentary than narrative, it follows The Beatles on a train to record in a London TV studio but as they dodge their fans, press and try and not loose Paul's uncle in the process, it is a time-capsule of true Beatlemania.
Since the marketing behind The Beatles was so precise and so brilliantly thought out, the film, which ended up being a box-office and critical smash, saw Capitol Records and United Artists release two albums called A Hard Days Night. One of those albums ends up being the actual album of the same name, which on vinyl - all of Side A is half of the films soundtrack and Side B is all original material. United Artists released a 12 song soundtrack which made fans buy the album or songs twice. No wonder the music business boomed back then! A Hard Days Night - the soundtrack - still stands as one of the greatest musical achievements of all time and holds high remarks as some of the greatest pop tunes recorded. The songs were featured in the film and enhanced the sound and style of Liverpool's favorite sons even more. The actual album of the same name is just a further step toward great records as the album is re guarded as one of the greatest of all time and one of the greatest early-Beatles albums.
Posted by Salvatore Bono at 4:47 PM