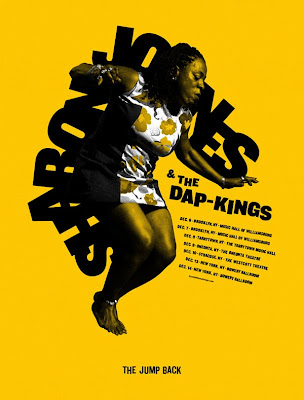 If James Brown was the “hardest working man in show business,” it could be said that Sharon Jones is the hardest working woman in show business. Sadly—like many hard working women in this country—she is underpaid and underappreciated when compared to her male counterparts. That said, Wednesday night’s 10th Anniversary Tour homecoming concert at Music Hall of Williamsburg was an example of how Sharon Jones and The Dap Kings’ hard work and prolific touring has paid off.

It’s impolite to ask a lady her age, so suffice it to say that Ms. Jones moves as well—if not better—than performers a fraction of her age. For a solid two hours, Jones and the Kings put on a clinic of R&B, funk and soul in the Brooklyn neighborhood that’s become increasingly lacking in soul. A decade of touring have made the Dap Kings one of the tightest bands on the road, and they’d be odds-on favorites in a cage match for the title of “best soul band on the planet.”

After a few warm up tunes to energize the sold-out crowd, the diminutive Jones strolled out on stage and led the band through their take on “This Land is Your Land,” which most folks know from the opening credits of Jason Reitman’s Up in the Air. The set was spread throughout the group’s catalog, most specifically from 2010’s I Learned the Hard Way. Several songs featured extended interludes, including “Got to Be the Way It Is,” where Jones channeled the dancing steps of her West African and Native American ancestors, and “How Do I Let A Good Man Down,” where she brought up a gaggle of girls from the front row to have an impromptu dance-off.

Jones is the star of the show, but she feeds off the energy of her incredible band, The Dap Kings, who showed off a three-piece horn section, twin guitars, bongos, bass, drums, keys and a duo of backup singers known as The Dapettes. They turned Music Hall into a dance hall during the anthemic “I Learned The Hard Way,” the soulful “How Long Do I Have to Wait” and the bouncy “100 Days, 100 Nights.”

Unlike most concerts, where the “encore” is a pre-scheduled suffix of songs, the packed house at MHOW willed the Dap Kings back to the stage, stomping the floor in unison so much that it surely knocked a few jackets off the coat check downstairs. After making the crowd sweat it out for about 5 minutes, the band returned to the stage and served up the deep cut “He Said I Can” and finally closed with the sexy jam “Let them Knock.” They’d exceeded the frivolous midnight sound curfew, but Jones left the stage one last time with a pep in her step, as if she could keep the party going for another hour.

It was the only hometown show for the Brooklyn-based Dap Kings who will play a sold-out Bowery Ballroom next week
*Bill Reese is the Managing Editor to Officially A Yuppie, he is also the host of our podcast - "Officially A Podcast."
Posted by Salvatore Bono at 4:14 PM