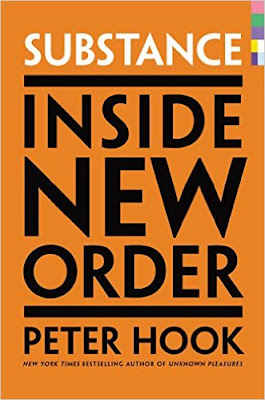 Peter Hook's latest book, Substance: Inside New Order, is the ultimate biography of the band and it is told by the man who lived and saw it all. New Order formed shortly after Joy Division singer Ian Curtis took his own life. The surviving  members formed New Order and took the 1980s and beyond by storm. Hook, who was in the band until 2011, gives practically day-by-day account of what happened from making music, playing gigs, to the sex, drugs, and rock and roll.

"The writing process has become easier as it's my third book but as I think people can tell each book has taken a lot of time and they're quite in depth. The New Order book is some 800 pages long but it does deal with twenty six years of the band. As for rediscovering the past I find it sometimes weird, especially when you're concentrating gig by gig, session and trying to remember precisely the details but it can be interesting when a revelation appears. It can sometimes be a little unnerving but I have learnt to deal with it by now," he told Officially A Yuppie earlier this month.
Read Our 2017 Interview with Peter Hook

While Substance is a lengthy read, the book is everything a fan would want to know. As he looks back on his life, Hook tells it from an honest point of view of how the highs were high and the lows were the worst one could imagine.  As the band continue on without him, Hook gives a candid account about his departure and his life today.

Posted by Salvatore Bono at 5:42 PM