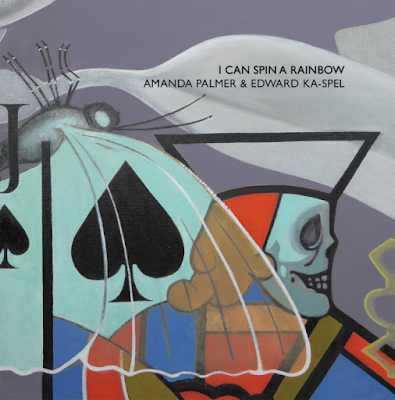 In May, Amanda Palmer and Legendary Pink Dots singer Edward Ka-Spel will release their collaboration album, I Can Spin a Rainbow.

"We merged our songwriting heads and poetic worlds to make a new universe," Palmer said in a press release. "We would sit in Imogen's house drinking cups of tea, bemoaning the state of the upcoming election, binge drinking in the UK, the refugee crisis, our internet addictions, frightening news we had read, our relationships...and then we'd compost all of the ingredients of our fears and conversations into song form. The Rainbow metaphor - which is also a nod to the 'spinning beach ball of death' on a Mac - was a wide-open image that kept popping up as a recurring theme on the record. It's both dark and light at the same time. To me, the songs are simultaneously frightening and comforting, like a thunderstorm heard from a living room."


Take a look at the cover, above, and the tracklisting, below: