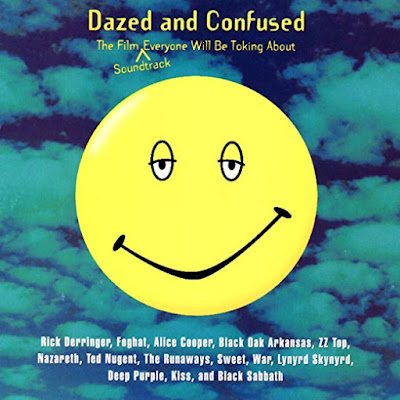 In 1993, Richard Linklater released his breakthrough coming of age film, Dazed and Confused, and help launch the careers of Matthew McConaughey and Ben Affleck. Along the way, the film became a cult classic and its soundtrack perfectly captured the era in which the film takes place.

Before That 70's Show brought on nostalgia of the 1970s, Dazed and Confused paid homage to the decade in the film about growing up in suburban Texas and trying to make a name for yourself in high school. It had the stoners, the jocks, the rejects, the nerds, the cheerleaders, the "it" girls, and those trying to break through into each clique. The soundtrack captured the era brilliantly and still holds up. Featuring the music of Aerosmith, Alice Cooper, Black Sabbath, ZZ Top, Deep Purple, The Runaways, War, Foghat, Lynyrd Skynyrd, KISS, and more, it is the sound of rebellious rock and roll as the genre even came of age.
Posted by Salvatore Bono at 3:12 PM