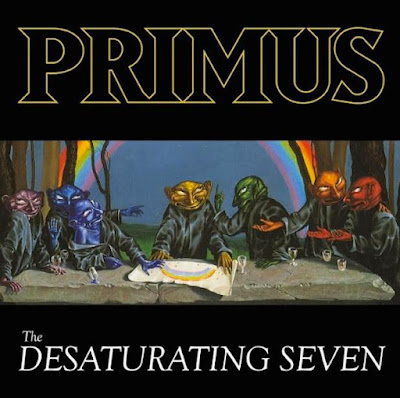 Primus will release their first album in six years, The Desaturating Seven, at the end of September. Take a look at the cover, above.

NYHC legends Sick of It All were involved in a car accident over the weekend after they were hit by a drunk driver while touring with the Vans Warped Tour. Thankfully everyone is okay. They wrote a statement saying: "Last night a drunk driver plowed into the side of our bandwagon. We are all ok, aches and pains, bumps and bruises as far as we know for now. We don’t know how the guy who hit us is but he wasn’t looking good when they pulled him out. We are feeling a little stiff but we are still playing tonight at 8:00 on the Hard Rock stage! Thank you so much to Bad Cop Bad Cop and Valiant Thor for coming back to pick us up so we can make the show. Hauling our Merch and setting it up. Laila and Sonic Boom Six for lending us their hotel room for much needed rest! Dom and Bunny for selling! Thanks for all the well wishes. Please do not drive drunk!!!"

Action Bronson took to social media last week to announce that his long awaited new album, Blue Chips 7000, will be released next month.

Blood Orange took to Instagram over the weekend to announce that he is currently working on the follow-up to last year's Freetown Sound.


Jack White is currently working in L.A. and New York on a brand new solo album, according to his label, Third Man Records.


Interpol drummer Sam Fogarino spoke to Pitchfork Radio over the weekend and confirmed that the slick NYC indie rockers are working on new music. He was asked how it was going and he said: "it’s hard to say when you’re in the room and it’s live,” then, he teased that the new songs were “fist in the air arena rock ballads, all the way.”
Posted by Salvatore Bono at 5:45 PM