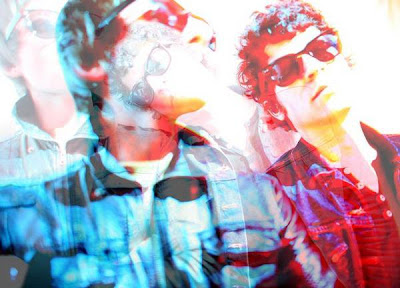 From the ashes of hardcore bands like Some Girls and The Plot to Blow Up the Eiffel Tower led to the formation of neo cold-wavers, Crocodiles. The band, made up of Charles Rowell and Brandon Welchez formed in 2008 in San Diego, California and have been turning heads with their two releases, 2009's Summer of Hate and 2010's Sleep Forever. While the band was hoping to have a new album out this year, due to their touring schedule a new record will be put out next year. We spoke to Welchez as the band was on tour this past summer. Take a look as we discuss how they left hardcore to play in a new genre and their DIY aesthetics.

The both of you came together after the respective fall from your former bands. You were both in hardcore bands and had a sound and style completely different than what you do in Crocodiles. Why the drastic change in style?

BW: We don't consider what we do now that much different than what we did then. I never considered myself as part of the hardcore scene - I may have played in other people's hardcore bands, but that was because they were friends or for something to do. Our main old band was a punk band, which I feel like Crocodiles are too. We started the Plot when we were 19, we started Crocodiles in our mid-twenties. The change isn't as drastic when you consider the amount of time. It took us that many years to figure out how to write pop songs and how to reconcile that with our more experimental desires.

Hardcore has its roots in DIY as does what you are doing now. Is there anything that you learned from your previous bands that you will not repeat in Crocodiles?

BW: From being on the fringes of the hardcore scene, we could see how dogmatic it could be. This was something that we tried our hardest to comment on and rebel against. I guess that taught us to resist with as much force as we can the tendency for people to push you into a scene as an artist. All we are after is total freedom.

The band has been compared to Jesus and Mary Chain, Echo & The Bunnymen and other cold-wave British bands. How do you feel about these comparisons?

BW: I feel that they are very lazy comparisons, but there is no point in arguing about it. I like those bands, so I'm not insulted but I think anyone with more than passing knowledge of music hears a lot more.


Who are some of your biggest influences?

BW: We are influenced by everything we've ever loved - Ramones, Beatles, Neu!, King Tubby, Monks, Antioch Arrow, Motown, Albert Ayler - literally all the music we've loved since we've been teenagers finds it's place in what we do now.

Speaking of Echo & the Bunnymen, is that where you get the name of the band, from the band’s acclaimed record?

Cold-wave or Noise-pop as some call it, has made a comeback in the last few years. With acts such as yourself, Glasvegas, The Horrors, Chapel Club and others, do you feel that we will hear more bands with this sound? If so, why?

BW: Like I said, we don't feel any affinity towards anything like cold-wave or noise-pop. We just make the songs we want to hear and journalists decide we are this or that. In other words, I have no comment or knowledge about what may happen with these genres.

In just a few short years you released two albums on Fat Possum records, how is it to be apart of that family?

BW: We have a very good relationship with Fat Possum. We are just proud to be on the same label as Paul "Wine" Jones.

BW: We would love to! Our goal was to do an album a year. Unfortunately, due to touring commitments, we won't be able to record until early fall at the soonest, so I doubt it will come out until 2012. We do have a lot of our third album already written.

Though the band is just the two of you, but your live shows have a full band. What about the recording process? Is it just you guys in the studio with the producer?

BW: Yes, it is just the two of us with a producer for recordings. Our touring keyboardist has come in to add female vocals or organ parts occasionally but in general it is just Charles and I.

Being from the West Coast does that have a heavy influence on your songwriting?

BW: I think the frustration of living in a pretty boring city affected our first record but now I don't think geography has much of an influence on us.
Posted by Salvatore Bono at 1:05 PM