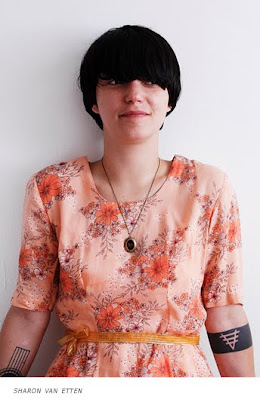 Brooklyn has been the epicenter of music for the last decade and the camaraderie between bands is a special bond rather than competition. Each band tries to help out their talented friends, for Sharon Van Etten, it is her famous friends that have not only pushed her to perform and pursue her career, but they have been the best publicity any singer could ask for. Encouraged by Kyp Malone of TV on the Radio to record and release her music and pushed heavily by the men of The National, the Brooklyn bond among bands has given Sharon Van Etten a tremendous platform. I sat down with Sharon to discuss her career, inspirations and the assistance given to her by her famous friends. Take a look at my interview with Sharon below.
When did you start making music?
In 3rd grade I took violin lessons and then moved on to clarinet. Then I moved on to choir and joined musicals when I was in high school.
What is your songwriting process? Do you lay out the music first then lyrics? Both at the same time?
It's usually guitar and melody. Lyrics come later.

When writing your lyrics are you looking to tell a story or engage in a poet way to display your emotions?
I write stream of conscious about an intense emotion I am trying to work through...
When you started out you were encouraged by Kyp Malone of TV on the Radio to peruse your musical dreams. How grateful of his advice are you now?
Kyp took me under his wing and brought me to Brooklyn and encouraged me to pursue music. I will always be grateful of his friendship. He is a mentor. He changed my life.
Both of your albums, Because I Was in Love and Epic deal with heartbreak. Was it heartbreak from a former lover, the passing of a relative or just the end of a friendship that inspired these songs?
All of the above and more. I use friends situations as well as my own.

Do you feel you need to go through something devastating in order to write your material?

No.
Has making music helped you in emotional recovery?

Yes.
You worked with The Antlers on their debut, Hospice, what was it like working with them? How did you get involved working with them?
I wrote them after I heard them online and they invited me to a show in the city, their live show was amazing. I invited them to one of my shows and they came. Peter shortly after asked me to sing on his record. He was working on it in his bedroom and I remember thinking how much of a badass he was and we punned all day long. We became friends after that.

So many bands, from Bon Iver to The National have covered your song “Love More.” How does it make you feel to hear someone cover your song?

What are your favorite songs to cover?
I've only done a few. Blaze Foley 'ooh love', Lou reed's 'perfect day', U2 'With or Without you' w/ Junip, REM 'Strange Currencies', Morissey 'the more you ignore me'