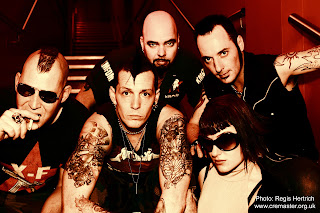 For almost 30 years industrial legends KMFDM have been going strong. They have survived break ups, line-up changes, addictions, the music industry and the business model of the music industry to still lead the forefront of one of the world's most intense live bands and loudest bands. With the release of their latest album, Kunst, the band were inspired by the incarceration of Russian punks, Pussy Riot and helped get attention to their cause and case. As loud, brutal, and fast as ever, KMFDM are showing no signs of stopping or slowing down anytime soon. We spoke to the bands leader, Sascha K., about Kunst, the bands history and what fans can expect on their current tour.

Kunst is your 18th record, did you ever think this band would have reached this many albums?

When I started I didn't even think of making even one album, let alone do this for 29 years.

You are never one to hold back your true feelings on anything, especially the system, this record was inspired by the plight of Pussy Riot. Where were you when you first heard of their incarceration?

As for PR, I knew about them a long, long time before they got incarcerated, actually since the frozen chicken episode probably, then saw the footage of the 'punk prayer' within maybe 1-2 hours of it going down and followed the wholly folly of the trials closely. I live in Germany, that' where I was at the time.

If there is anything you could say to those women, what would it be?

I'm proud of you and your message and support you in your plight, no pasarán ! hasta la victoria siempre!

Does the cover of Kunst also reflect Pussy Riot’s cause, a woman taking a chainsaw to a crucifix?

The Ukrainian feminist group FEMEN actually felled a cross in Kiev in protest to PR's incarceration, it's an illustration of an actual event that took place, look it up on YouTube.

Hailing from Germany, especially at a time when censorship and Big Brother was watching, do you feel you can relate to the women of Pussy Riot?

I am not sure what you mean by relating big brother and censorship to Germany. Censorship in Germany is almost inexistent, except for child-pornography and Nazi-stuff.

If you try to make a cause in regards to the 70's wave of terrorist activities by the Baader-Meinhof gang and the Red Army Faction and the resulting systematic manhunt network of computer-based profiling of nearly the entire population, then no, I do not relate to PR because of my historical background.

I relate to them because they have balls and they are not afraid to show that. Political activism is important. It is necessary for the ones in power to hear the voice of discontent in order to give them a chance to perhaps pause and rethink, regroup and reconsider.

What did you do differently on Kunst that you had not done before with the band?

Nothing intentionally, they just all turn out different from one another, like children...

Also on Kunst, you finally address the “Kill Mother Fucking Depeche
Modes” false acronym that has hovered over the band for so long. Why now? Also, do you have any disdain for Depeche Mode?

In 1999, KMFDM said Adios, but in 2002 you came back. What caused the comeback and now 10 years into the reunion you show no signs of stopping. Will anything ever derail this band at this point?

I felt like doing something different for a while at the same time regrouping the line-up of KMFDM which had got stuck in internal strife, so i renamed the whole into MDFMK and made an album on Universal and went to Japan with a guitar-playing one-eyed 7-foot robot named Zyclor.

Aidan "Brute!" Hughes has played such an important role in this bands image. How did your relationship with him come about? What is your favorite cover he has done?

We have been introduced in 1987 and have worked closely ever since. He lends brand-identity and visual personality to our music. I like not one particular image but the thing as a whole.

Politics and social situations have always been at the forefront of KMFDM’s music. What do you say about the world we live in now?

I won't say much about the world, because I can't say shit about things I don't really know. But what regards the state of Europe and the US, the only places I know a little bit about is this:

The system is what we let our 'democratically elected representatives' get away with over time. We don't even really value our democratic constitutions because we have become politically disinterested and alienated, therefore don't even make an effort to follow what is going on in 'politics' anymore.  A leading class that feels unchecked by the people that initially empowered them is running astray and loses course and direction.

I am not getting started here on money, banking and capitalism in general, suffice it say that we released KMFDM is a drug against wall street, a slightly altered version of the KMFDM classic A Drug Against War

Now, back on the road, are the shows just as brutal as they have been in the past? What can fans expect on tour from you now?

Shows as brutal as ever & then some...