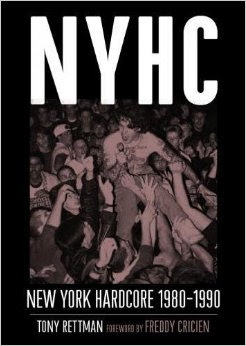 Following the emergence of punk in the Big Apple in the mid-to-late 1970s, by the early 80s, a new form of the genre was taking shape and would become an imprint and fixture in New York City for generations -- hardcore. In 2014, Tony Rettman documented the first decade and rise of the scene in his book, NYHC. As the misfits from the Lower East Side of the city would play in clubs and bars in the area as well as Chinatown and the Limelight, NYHC became the blueprint of balls to the wall music and aggro. Bands like Agnostic Front, Sick of It Hall, Cro-Mags, Murphy's Law, all emerged from the scene as leaders and heroes. All the bands still play today.

NYHC is not just a document on the era but an account as to what happened and told by some of the people who lived it and continue to push for it. With over 100 interviews from members of Misfits, Kraut, Death Before Dishonor, Absolution, Adrenalin O.D., Agnostic Front, Antidote, Bad Brains, Bloodclot, Bold, Born Against, Breakdown, Cause for Alarm, Citizen Arrest, H20, and more, NYHC is the definitive account of what happened by who created it and watched.
Posted by Salvatore Bono at 12:46 PM