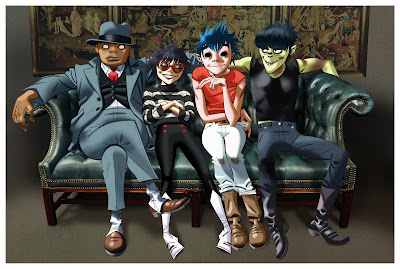 Damon Albarn spoke to Zane Lowe on his Beats Radio 1 show where he said he has about 40 unfinished Gorillaz tunes. “I can stay in the game for at least another 18 months, I reckon," he told the radio host. He added: "I’m just sort of slowly going through all tunes that sort of didn’t work out and finishing them." No word if they will ever see the light of day.

Speaking of Gorillaz, Pusha-T, who appears on the animated band's latest single, "Let Me Out," with Mavis Staples, also spoke to Zane Lowe recently and said that Damon Albarn envisioned a Donald Trump presidency last year and used that as the basis for the animated band's forthcoming record, Humanz. He said: "to conceptualize the album, you know, like the album’s a party for the end of the world, like if Trump were to win.” He added: "So when it really happened, I was like, ‘Wait a minute.’ And then I started wondering like, what type of crystal ball did this guy have? Like why are you even asking me to even think along these lines? And he really did, man. He was first. I don’t think that he thought he was going to win, I’m not gonna go that far, but he definitely conceptualized this whole thing.”

Queens of the Stone Age are up to something and took to Twitter to post about it. With an image of a broken window forming their signature "Q" logo, the band may be making an album or single announcement soon.


The Melvins will release their first double album, A Walk With Love and Death, in July. Take a look at the tracklisting, below: