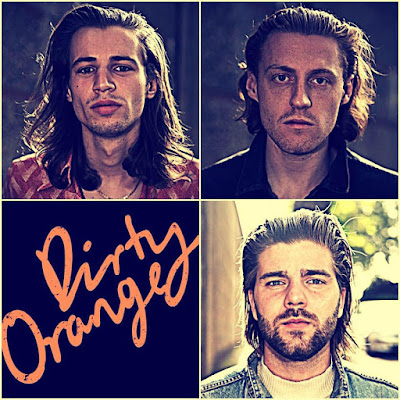 Last year we introduced you to British garage band Dirty Orange and in just a few months, the band has been getting some serious buzz around their country. The London trio are a hybrid of early Arctic Monkeys meets The Stooges. It is a rock and rollers love affair rolled up with a modern twist.

Read Our 2016 Interview with Dirty Orange

After releasing their fantastic EP, Short Story About the Lady of the Night, the band have returned with two brand new singles, "No Life Beyond 20," and "Would You Rather?" In an era when rock and roll is on life support, the two singles help inject some much needed adrenaline. The lead single, "No Life Beyond 20," is a catchy number with serious hooks that is the most Britpop sounding release they have had. "Would You Rather," is a straight punch to the gut with roaring guitars and savage riffs that pin you down to the ground and make you want to scream "uncle" in order to release from its submissive hold.

As the new songs just landed on all streaming services, we spoke to singer George Wilkins about how the band has been coming along since we last spoke a few months back.

After being together for over a year, you have been gigging all over England. How has the experience been?

Eye opening! As an overall experience it has been second to none. Every gig has been mad, for example; not having a kick pedal five minutes before we were due on in Manchester, to eventually playing in front of capacity crowd, which arguably was our best gig to date.

What has being in the band taught you so far?

I think we’ve learnt never to take shortcuts and to not take anything personally. Being a member of Dirty Orange requires a shit load of patience.

How have the crowds been?

Up and down as you can imagine, but we received nothing but positive feedback from crowds in general. People seem to respond well to our sound.

Where has been the best place to play?

Manchester and Camden, Camden isn’t probably what it was in the late 90s and early noughties, but it’s still buzzing every night of the week, and a mega place to gig.

Are you planning a debut?

No just yet, prioritizing, gigging, getting a bigger following and constant improvement… then we’ll start thinking about our debut!

How did the new songs come about? Were they left over from the EP sessions or just two totally new tracks?

‘Would You Rather’ was a brand new song which we decided to record last minute and ‘No Life Beyond 20’ was golden oldie which we had been planning to record for some time.

What inspired the new songs?

‘Would You Rather’ in particular was a real quick process based around a lead break and a drum roll. ‘No Life..’ was a longer progression, which started with telling lyrics, followed with music which perhaps is more widely appealing than our other songs.

When can we expect you in America?

What has been the best thing about being in the band thus far?

Being able to express ourselves as individuals and as a band, finally doing what we want to do not what society expects of us. There’s plenty of people out there who feel the same as we do, music just happens to be our medium to say how we feel. You only have to watch Connor play drums for half hour to see how pissed he is with tiling for a living. All in all though, we ain’t stopped learning, we ain’t stopped drinking and we ain’t stopped laughing.
Posted by Salvatore Bono at 6:45 PM