Movie of the Month: 'Beats, Rhymes, & Life: The Travels of A Tribe Called Quest' 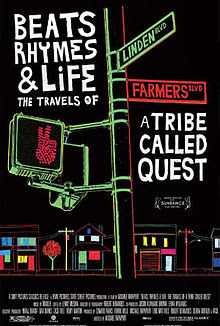 This time last year, A Tribe Called Quest released their first album in almost 20 years and 2016's best record -- We Got It From Here... Thank You For Your Service. The iconic hip-hop outfit from Queens put aside their differences and fired back with one of the greatest comeback records in history. Sadly, they lost founding member Phife Dawg in the process. In 2011, fans got to see how turbulent the members of the group were with one another as well as saw how severe Phife's issues with diabetes was in the documentary Beats, Rhymes, and Life: The Travels of A Tribe Called Quest. The film, directed by Michael Rappaport, not only detailed an oral history of how the group formed with stories from members Phife, Q-Tip, Jarobi, and Ali Shaheed Muhammed, it also showcased how they changed hip-hop forever. Rappaport took fans into Q-Tip's think tank and record collection to see where he discovered samples, they go back to the high school they all met in, as well as openly discuss their problems with each other on their 2009 reunion tour. While the film ends with the groups second break-up, it almost feels as if in the years since a second part needs to be made including that of their "farewell" concert to New York City in 2013 when they opened for Kanye West at Madison Square Garden to their reunion making their final record, as well as the passing of Phife Dawg and how they carried on for 2017 without him. The film is their story presented by a fan for Day 1 fanatics as well as novices to the group.


Listen to Our Essential Tribe Called Quest Playlist on Spotify
Posted by Salvatore Bono at 5:43 PM