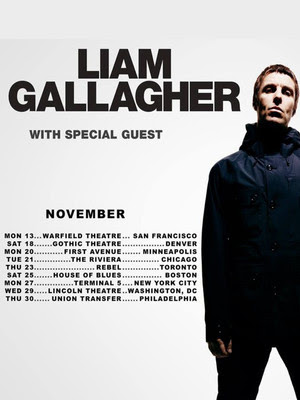 Gallagher, who is on the road in support of his fantastic debut, As You Were, returned to New York City just months after making his North American solo debut at the McKittrick Hotel and Rough Trade this past spring. The former Oasis singer brought his swagger, flair, and the anthems and turned up the heat on a cold November night inside the 3,000-person venue Monday.

The singer last played Terminal 5 in December 2011 with his former band, Beady Eye, which featured all of the former Oasis members sans older brother Noel. The last time Gallagher was at the venue it was just half filled, on Monday, that night wasn't even a memory as the packed crowd chanted his name from start to finish as if he was a prize fighter duking it out with his brother.


Liam Gallagher took the stage at 9 p.m. sharp as the venue's house lights went down and the Oasis Standing on the Shoulders of Giants lead track "Fucking in the Bushes" blasted across the room. In his Pretty Green parka, the singer took the mic and said "New York Fookin' City!" which got thunderous applause as his band busted into "Rock N Roll Star" and then went straight into "Morning Glory."

The singer then went into his brand new solo tracks and brought them to life for the capacity crowd. Songs like "Greedy Soul," "Wall of Glass," "Paper Crown," "Bold," and "For What It’s Worth," all got the same reaction from the crowd as the Oasis anthems. Unlike his brother, there is hardly any banter between songs -- which what Liam liked during Oasis. He lets the music do the talking and allows the audience to react to what he is feeding them.

Oasis songs like "Slide Away" and "Some Might Say" were met with thunderous applause and new songs like "Come Back to Me," and "You Better Run," weren't just well received -- they had the audience begging for more.

His backing band sounded better than ever and of the many gigs we have covered inside the tall and narrow venue since it opened, this was one of the best sounding and loudest we have seen at Terminal 5.

The only disappointment of the night was that the show was simply too short. Gallagher performed for 70 minutes including an encore that featured "Cigarettes and Alcohol," and a stripped down version of "Live Forever."

"New York Fookin' City, stay safe, I hope to see you soon," Gallagher said as he left the stage. As the music played out, fans chanted his name like they did at the start in hopes for him to come back out but he never did. However, like a good showman, he left the crowd wanting more.

NEW YORK FUKING CITY i adore you stay safe hope to see you soon as you were LG x
A post shared by Liam Gallagher (@liamgallagher) on Nov 28, 2017 at 12:46pm PST

Posted by Salvatore Bono at 5:36 PM