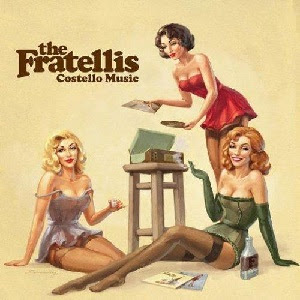 In the middle part of the 2000s first decade, it felt as if there was a third British invasion as bands from the UK like Bloc Party, Franz Ferdinand, Kasabian, The Libertines, Babyshambles, were all kicking down America's door. One of those bands, Scotland's The Fratellis came onto the scene like a firecracker and were everywhere. The trio released their fantastic debut, Costello Music in 2006 in the UK, nearly six months later, it arrived across the pond and was inescapable. The band's single, "Flathead" was everywhere from iPod commercials to shopping malls to commercial radio, and no one seemed to get tired of it. The record which the song came from also was just as catchy and solid as the single. Costello Music was the perfect garage rock album with catchy hooks, fun choruses, and an energy that wasn't seen in many of the new bands coming from England. They referenced Oasis, loved the Stones and Stone Roses, it was everything people loved about the generation of Britrock before them and put out in a loud package. Now, a decade later, the band's popularity seems to have plateaued but are still putting out quality records, however, none have failed to capture the market like Costello Music.


Read Our 2015 Interview with The Fratellis
Posted by Salvatore Bono at 6:01 PM