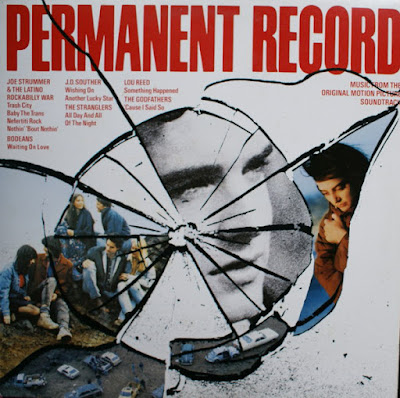 In 1988, a rising Keanu Reeves starred in the serious drama, Permanent Records, which was about suicide in young adults. The film, set in Portland, Oregon, became a cult classic and shed light on a topic then seldom discussed. To score the film, director Marisa Silver had the one and only Joe Strummer, who had recently split up the final version of The Clash to do the music.

Strummer, never one to stray away from social issues and hot topics, used the film's strong subject matter to give off the tone he was searching for. Strummer was backed by The Latino Rockabilly War and gave a sound that his longtime fans had not experienced from him before. Reeves, who plays guitar and bass in real life, also played with the former Clash frontman on one of the tracks. The soundtrack also featured music from Lou Reed, The Stranglers, BoDeans, The Godfathers, and J. D. Souther.
Posted by Salvatore Bono at 6:56 PM