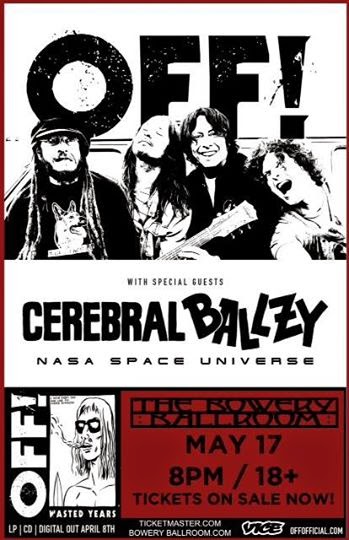 Before they even played a single note, the mood inside Bowery Ballroom was pretty unruly as cups of beer were projected at the stage as the punk vets in the supergroup OFF! took the stage. Singer Keith Morris, who used to front Black Flag and Circle Jerks, took his mic and said, "Don't throw your beer! Drink your beer! Don't be a fucking moron!" He then went on to introduce the band which features Dimitri Coats from Burning Brides, Redd Kross bassist Steven Shane McDonald, and Rocket from the Crypt drummer Mario Rubalcaba, and as they started their engines Morris shouted, "...and we are OFF!" The band went into their high-octane old-school garage punk sound that has had fans around the world thrilled for bringing the sound that made them infamous in their respective previous band back to a new generation who have really only heard that type of sound on records.

As circle pits broke out, stage divers launched into the crowd-- including Coats, and fists were punching the air, OFF! turned Bowery Ballroom into another legendary Bowery venue, CBGB's which was up the street from where everyone was letting loose on Saturday night. With a mix of old and new school punks, it was a chance to relive the glory days of a genre that in its purest form was its rawest. "We are on the road to promote a new record," Morris said, "It is what bands do when they have a new album out. Our record is called Wasted Years, we are going to play some songs off it." The record, which arrived last month, is typical OFF!, short, hard hitting distorted songs that break right into you.

In between songs, Morris would talk about the bands current tour with New York City's Cerebral Ballzy and California's NASA Space Universe, he would also talk about his long career making music. Yet, with his banter, would come hecklers who would want him to stop talking or would scream "Fuck Black Flag," to which a shocked Morris would reply, "No, it is not fuck Black Flag!" The crowd applauded and had his support, to then he would beat around the bush with the ongoing legal issues featuring Morris and some of the former members of Black Flag against Black Flag guitarist Greg Ginn. Morris would say, "Things like that make us stronger, inspire us, and make us put out music like this!" In the hour long set that include songs like "Panic Attack," "Void You Out," "Upside Down," and "I Got News For You," OFF! took New York City back to its roots.
Posted by Salvatore Bono at 8:31 AM