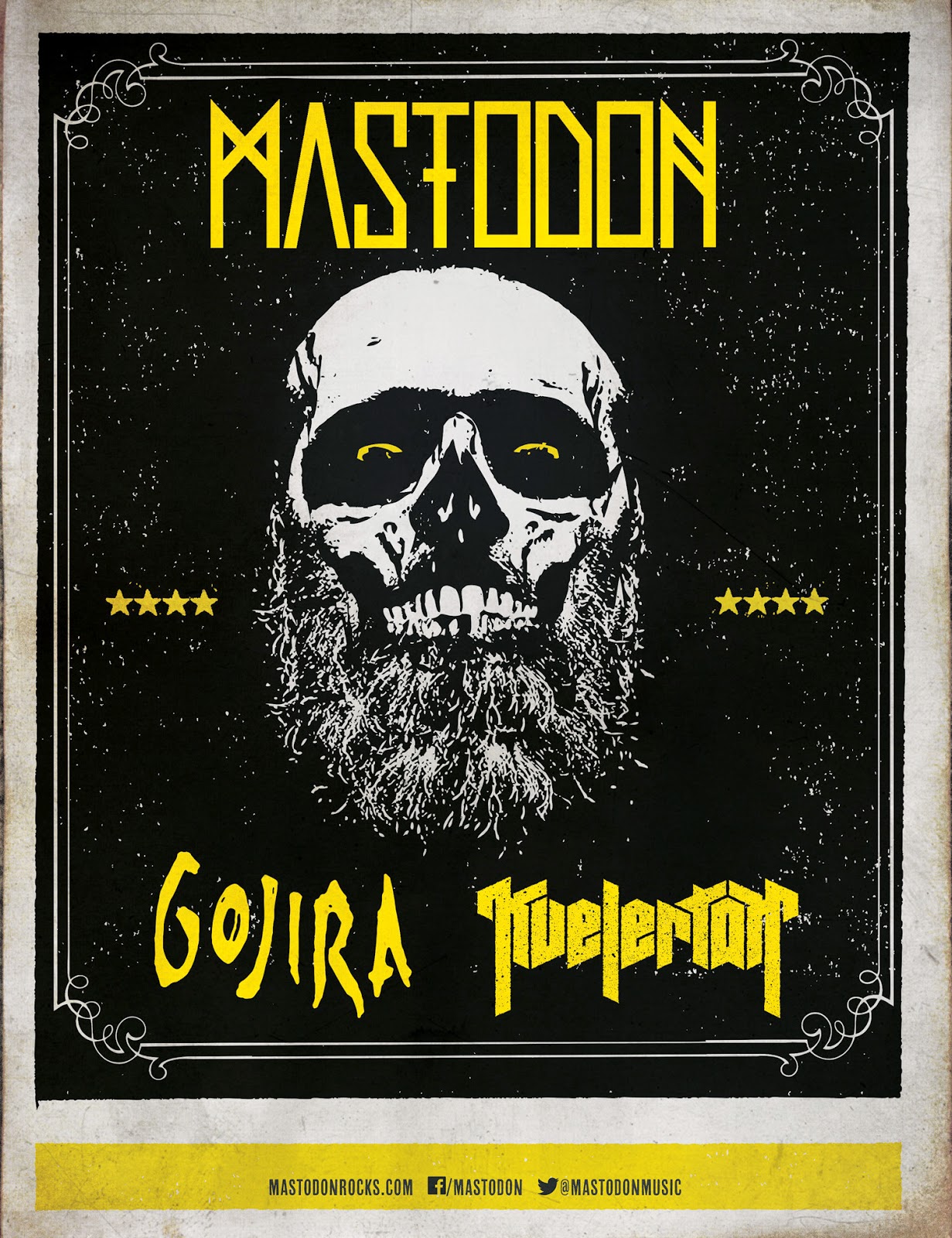 Last night, metal monsters Mastodon brought their triple threat, bone crunching bill to New York's Terminal 5. The bill, which Mastodon headlined, also had French metal heads Gojira and Norwegian black rockers Kvelertak exploding into cities around North America. As the Georgia band are currently on the road to drum up buzz for their forthcoming, Once More Around The Sun album, they did it in the best way possible -- just letting the music do the talking.

Mastodon are a band that appeals to anyone that likes their music hard and thunderous, but they also appeal to those who love good musicianship and playing. That being said, the audience at New York's Terminal 5 was split among those you would normally see at a metal show and those you would normally just see hanging around your local record store looking for classic rock vinyls. Over the years, Mastodon's fan base has rightfully grown and every time they return to New York City their shows get bigger and louder and last night was no exception.

Arriving on stage at 9:30, and walking out to strange psychedelic music, Mastodon took the stage to a deafening applause that was soon drowned out by the band saying "thank you" by plugging into the opening chords of "Hearts Alive" and then straight into "Divinations." The audience was just embracing it all. Every single hand was in the air punching the sky and throwing up devil horns and every single head was banging so hard you would have thought their skulls would have detached from their necks. Yet, the sight to be see was Mastodon themselves. Playing in front of a giant banner that featured trippy circles and images, the musicianship of this band is something to admire. Between the altering vocals of guitarist Brent Hinds and bassist Troy Sanders, the call-and-answer screaming meets melodic singing is something that has always made Mastodon stand out. Yet, the playing of guitarist Bill Kelliher and drummer Brann Dailor is enough to make John Bonham and Jeff Hanneman smile in their graves. The pulse pounding and relentless sounds the band create on stage is enough to send your heart into exploding pieces but the battle between the rhythm section and lead sections is musical fight for superiority. That is what makes the band a live band to experience. They battle each other on stage and while it may be an innocent maneuver, each member of the band has done this job for so long and so well that when they jam out to stretch out their songs and go into solo's it is a treat for the audience as each of them outdo the others.

In an unruly 80-minute set that included super deep cuts and songs from each of their albums, including two brand new tracks, "High Road" and "Chimes at Midnight," which are much more chomping and straight-forward metal tunes than their earlier work, it was relentless as they hardly took breaks between songs. At points Sanders would address the crowd and then them for coming to show and how New York's audiences are one of their favorites, it was all about the music. As they closed with "The Sparrow," the band retreated to the wings as Dailor came to Sanders' mic to thank the crowd again and say goodnight. Just like that it was over, no encore, no massive singles like "Curl of the Burl" played, it was just in your face hard rock that beat you until submission,