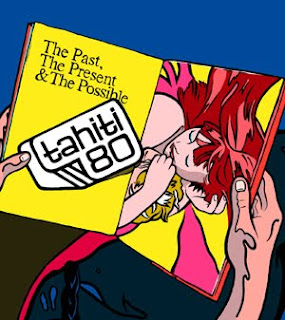 Sometime in 1999 as Harvey Danger’s “Flagpole Sitta” and Barenaked Ladies “One Week” was storming the alternative and mainstream music charts, and a little band from France with a very interesting sound was peaking through and started showing America what they were made of. Tahiti 80, arrived in the US with their debut Puzzle and brought with them a sound that mixed new wave, Britpop and bubblegum pop – the perfect storm of radio friendly rock if you will. Yet, as America was basking in catchy tunes, these French hitmakers were creating a sound that would be ahead of their time in terms of style and sonic dynamics. Long before Phoenix had a hit record and Air were making ambient sounds, Tahiti 80 were poised to be Frances biggest export that were not hiding under space helmets (see Daft Punk).
Forming in 1993 in Paris, the band with their catchy sound would release a slew of EP’s in Europe and through relentless touring would gain attention in their native country and eventually all through the rest of the continent. “Pedro (Resende) & I started Tahiti 80 as a 4 track project. Then, we released a self produced EP in 1996. It just took some time to find a label willing to take the risk to sign a French band singing in English. Though, I think it's a strength not to release an album when you're 19 and only have 11 songs in stock. For Puzzle we had 40 songs available, and we already had our own sound. That's why we're still around” singer Xavier Boyer told me as we sat down to discuss the band’s history and latest ventures. The band, which takes their name from a vintage T-shirt that Xavier’s dad gave him as a kid, have been making exotic and curious songs that fit the band’s enigmatic name. Through the years the band has seen many highs and lows, with fallouts of record labels, not cracking America like they should have over a decade ago and seeing their fellow Frenchmen gain massive international appeal, Tahiti 80 on all accounts should be a bitter group of French artists, yet, they are far from it. The band’s latest release, due this month, The Past, The Present & The Possible finds them dabbling in new territory while keeping true to the sound they pioneered in the 90’s.
“We're curious people, we're always reading blogs or magazines, searching for new bands or reissues…We're just not bored yet with music in general, and we still like each other's company,” Xavier tells me when I asked about the difficulties of making new music and still being inspired after all these years. The sessions for The Past, The Present & The Possible took place in Rouen, France, the band’s base for many years. Xavier says “We definitely went for a more experimental approach with tight dynamics and synthetic sounds, as opposed to the "classic" vibe of our 4th album, Activity Center.” All of which they were aiming for has been achieved, The Past, The Present & The Possible is a fun and dynamic record that may very well be their ticket back into America and for American ears to savior, even for those who are listening for the first time.
As the decade plus years that have gone by since Tahiti 80 made their first attempt at breaking America, French music has been invading the eyes and ears in all genres. With acts like Daft Punk, Phoenix, Justice, SebastiAn, Busy P, Charlotte Gainsborg, Uffie and a slew of others, global audiences have embraced these acts. Yet, Xavier does not see this as a French musical revolution “A lot of these bands have been out there for a while now, so the French invasion is not such a new thing. Daft Punk and Air were important to us because they proved we could do it too, even if we were not playing the same kind of music. To be honest, a lot of French bands jumped on the bandwagon, using what I call "Vocoder English" and still benefit from the aura of the original "French Touch.” While the sound of Tahiti 80 may echo Phoenix to new ears, it was Tahiti 80 that had the influence on Thomas Mars and his band. “Our first album came out before theirs, that makes us the true originators of this scene! No, I don't think they stole anything from us. We're both French bands fronted by -more or less- high pitched singers blending Anglo American rock with a touch of soul music,” says Xavier. This humble approach and lookout on things is the exact reason Tahiti 80 has weathered the music industries storm for so long and will keep blasting out new music and continue to do so until they feel that creative nerve is gone.
While it was over a decade ago that they were battling with pop artist from all walks of music for America’s attention and their fellow countrymen have come in to claim a musical throne, Xavier is not disappointed, in fact, I found him inspired, “. Right now, it's a lot of marketing & concepts etc. and there's not much going on underneath the surface…No songs. I miss that part, the perfect pop song is what everybody should look for…” Given his determination and the direction of his band’s latest record, I believe he will craft it.

Posted by Salvatore Bono at 4:40 PM