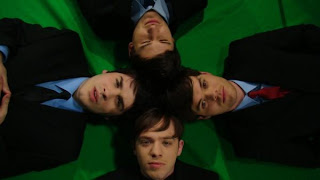 Fast, clever, fun and most of all very catchy. England's Everything Everything have been the talk of their native country since releasing their debut album, Man Alive, last year. Forming in 2006, it was a hard but firm road the members of Everything Everything have been on to achieve the success they are chasing after. Last year saw them highly praised by fans and critics with Man Alive as well as beginning to gain international acclaim with their non-stop touring schedule. With the success of their debut under their belt, Everything Everything are now climbing the ladder even higher. As the band has been on tour in Europe, we spoke with drummer Michael Spearman, who took time from his busy schedule to discuss the bands beginnings, success and appeal. Take a look at our exclusive with Michael Spearman below.
How did the band come together?
Three of us met at school, then one extra at university in Salford. We had a line-up change in the form of a new guitarist about 2 years later.

Does the name of the band come from the Underworld live record of the same name “Everything, Everything?”

No, we had no idea about this, though we do like Underworld a fair amount.

Very thrilling and relieving at the same time, we were in a haunted farmhouse in Wales in the middle of nowhere which gave us lots of inspiration.

Do you feel any vindication now that it is out?

Yes it feels liberating and also a but daunting, in the best way.

You titled the record “Man Alive,” how did that title come about? Does it have anything to do with how fans will feel during and after listening to the album, feeling very alive?

Well we like that idea yeah, the title actually comes from a song on it called Qwerty Finger. We like the myriad meanings you can take from it, depending on how deep or shallow you want to look.

Who came up with the concept for the cover art? It is pretty fantastic!

We based all the artwork on lyrics from our song 'Tin', we asked our artwork people (tappin and gofton) to track down images of urban foxes. Oddly enough we discovered later that we had a very close relationship with the photographer who's photos we had already chosen - jeremy's childhood's friend's father's best man!

How would you describe your sound to someone that has never heard of you before?

You started off in Newcastle then moved to Kent and now reside in Manchester, do you consider yourself an Manchester act or just a British act?

Two of us were from near Newcastle, one from Kent, one from Guernsey. Yes a British act is a good term, I wish more of the media were content with us being that and not concentrating in where we are or aren't from.

With the backing of Manchester, do you feel any pressure to live up to the musical legacy of that city?

The true legacy of Manchester is a history of bands that looked to the future, something we've always tried to do. We feel extremely honoured to be a part of it, as we love the music of that city.

From BBC to NME to Q to Mojo to My Black Heart, every great British music publication has praised your band as the next big thing. How does this make you feel?

We hoped it would make a positive impact, but we were careful not to let reviews affect is too much - the way the album resonates with the public is more important, and more rewarding for us.

Do you feel any pressure to live up to these expectations?

We're often asked about pressure, I would have thought all bands try and do their best with each album and show. It's great that people have expectations; we don't feel pressured by it.

I ask this to every foreign act and surprisingly get a different answer everytime, is it a big deal to break big in the US for you?

It's the biggest deal in pop music; unfortunately you usually have to make a lot artistic compromises in order to even get close to the charts. You can be big in loads of different ways in the US, we'd love to be over there as much as possible.
Posted by Salvatore Bono at 8:28 AM