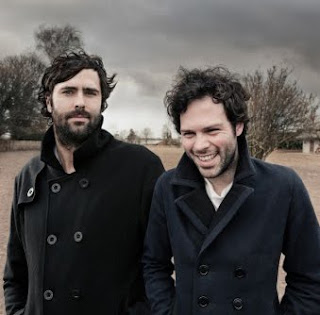 When you think of Keane, you think of Coldplay meets Duran Duran mixed with U2 style of radio friendly rock. Dark and intimate folk music is not normally the first thing that comes to mind, but for MT. Desolation, the side project of Keane featuring members Tim Rice-Oxley and Jessie Quinn and members of Mumford and Sons, The Killers, Noah & the Whale, MT Desolation is a stark contrast to the band that has gotten Tim and Jessie global attention. However, for these two gentlemen it is all the more reason to try something new. It's sound is very Americana folk and very stripped. Taking their name and inspiration from Jack Kerouac's novel, The Dharma Bums, MT. Desolation arrived last fall to fill the music hole in your heart that has been scorned by the world around you. In an exclusive interview with Officially A Yuppie, we spoke with Tim Rice-Oxley, a man who is not only responsible for composing the sounds of both bands he is in, but now taking on songwriting duties and singing responsibilities in MT. Desolation. Take a look at our interview with Tim below.
When did you realize you wanted to do a side project?

It really just came from a desire to keep being creative and trying new things, and also working with new people I suppose. This was just a vague feeling until Jesse and I - with a bit of dutch courage inside us - hatched a plan to make a country album, and that just felt like the perfect opportunity to turn my brain to something else when there was a break in Keane touring. That was early 2010.

Most of your Keane fans will hear that this is a departure in style and sound for you, was this your intention?

Normally I like to just follow my nose as far as musical style goes, but in this case it was a very definite decision to try to make a country album. And I think part of the appeal of that was knowing that it seemed like a weird thing for two pasty English guys to do. Initially there was very much a tongue-in-cheek element to the concept, for that reason - it seemed like it would inevitably turn out to be pastiche-y at best, and at worst utterly ridiculous! But as time went on and we started writing songs we were really excited about, the whole thing morphed into something we were a little more serious about and a bit more proud of.

With being “two guys from Keane,” is it hard to shake that persona and be your own individual band or does it aid in attention towards Mt. Desolation?

We did consciously challenge ourselves to make music that would not overlap with Keane at all - that was part of the fun. We really wanted to try and stand on our own two feet as a band, as it were, otherwise it would feel to us and to other people like a slightly annoying vanity project! So we shut ourselves away and did our thing, and obviously lots of other musicians brought their touches to the sound as well. But then when we kind of emerged into the daylight inevitably the first thing people said in the press was "Keane, Killers and Mumford and Sons form supergroup"! So I don't think we could ever deny that the Keane connection has drawn people's interest towards Mt Desolation. I guess I hope that when people hear the music they will love it regardless of whether they're interested in Keane or not. We'll see!


Where does the name of the band derive from? Is it a real location?

It comes from a book by Jack Kerouac called 'The Dharma Bums', which I read on Jesse's recommendation while we were on tour last year. It's a really beautiful and inspiring book about leaving everything behind, hitchhiking across America, drunken philosophizing, religion and friendship and poetry and all of the stuff that the Beat artists looked at with such fresh eyes. At the end of the book the main character goes and sits on a mountaintop which he calls Mt Desolation for three months and just thinks about the world. I think it's actually a peak called Desolation Peak somewhere north of Seattle.

You worked with members of Mumford and Sons, The Killers, Noah and the Whale among others, but at its core its you and Jesse. Did you want the revolving door of musicians to try various people to jam with?

One of the original motivations behind making this record was to create an opportunity to bring together a fairly disparate bunch of friends and make music with them. I've been fortunate enough to be able to collaborate with some really interesting people over the last few years, and you can be sure that you will always learn something new, that it can push you to be creative in new ways and show you new ways of writing or playing. So the idea of getting all these brilliant musicians together sounded like brilliant fun and we also knew we would learn loads from it - which we did!

It sounds like we were very organized about the logistics of the whole thing, but we really weren't at all! We basically put out the word not long before we went into the studio, and people just got excited about it and gave as much of their time as they could. The atmosphere was amazing. It was really idyllic and something we'll treasure for the rest of our lives I reckon.

The singing was pretty scary! Never in a million years will I be able to sing as well as Tom, but I've learned to make the most of what meagre skills I have! And the rest of the guys were very encouraging which put me at my ease. Jesse felt the same way I guess, so we really encouraged each other along. We recorded a lot of the album live, so there was a certain amount of pressure to nail the vocals...but it's good to do things that are a bit scary, otherwise you just stick to what's easy and comfortable and I would get very bored doing that!

The record has been praised by critics, does it give you a sense of not just gratification but just cause for doing this project?

As I mentioned before, it would have been easy for us to make an album that was just a self-indulgent thing, basically a slightly crap version of Keane! So it has been really nice that people have appreciated the album as a piece of work that is valuable in its own right. In terms of giving us 'just cause', funnily enough I can honestly say that simply making the record was justification enough. It was so much fun making music with Jesse and the rest of the gang - I've made some really good friends doing it, and spent some incredibly happy times that I will never forget. Plus I've learned a lot. You can't ask for much more than that.

Granted the debut album is about to be released, but will the band continue on after one record?

It's really impossible to say at this stage, but I do hope so. If nothing else, the recording and touring has been so magical that I would hate to think we couldn't do it again. We were actually talking about it this morning, all feeling a bit sad that we don't have more time to spend on Mt D. But Jesse and I are incredibly excited about making the new Keane record, and we want to get back to that. It's an amazing position to be in, to be torn between two things like this that we genuinely love doing - we're pretty spoiled really!

Posted by Salvatore Bono at 8:18 AM