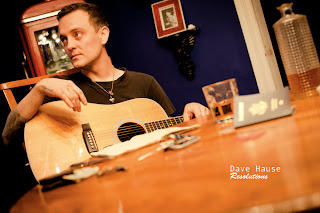 Dave Hause is the type of guy you would want to have a drink with. I have never actually had a drink with Hause, but after seeing him so many times, meeting him after gigs and listening to his music, he is just that down to Earth punk that writes songs that are headlines ripped from your life story. The singer of The Loved Ones has been enjoying success fronting the Philly punk band but earlier this year he released his acclaimed solo debut, Resolutions. Resolutions still has the firecracking punk that we have gone to love from Hause through the years but also shares a more intimate portrait as a songwriter as a majority of the songs are acoustic. I caught up with Hause and we discussed his inspirations, work with Loved Ones and solo material and myself getting very zealous and asking about him playing a putting together a tour with Hold Steady and Gaslight Anthem. Take a look.

Who are your biggest inspirations as a songwriter and musician?
They change over time. In the last few years it's been Conor Oberst, Jenny Lewis, Patty Griffin, The Hold Steady and Arcade Fire. The big ones are The Misfits, Springsteen, The Beatles, The Police, Tom Petty and The Clash.
What inspired you to make “Resolutions?”
I started writing songs and I felt like the direction they were taking was a bit too far in the "singer-songwriter" direction then I felt comfortable pushing The Loved Ones in. We're at our best when it's loud and intense. This record is more...quiet and intense. Once I had enough songs it just seemed clear to me that I should make my own record, and with the songs I have written for the next Loved Ones record, I feel like we'll be doing what we do best, and now I have another medium to work within.
“Resolutions” is your first full length solo material, was it odd doing a record by yourself after being in bands for so long?
It wasn't too odd, I assembled a great group of people to play on it and it felt like a band. The main difference between working within The Loved Ones paradigm and doing solo stuff is stylistic, not logistical. I worked with Pete Steinkopf, who is a dear friend of mine, to make the record and we just had the best time tracking and hanging out.
After releasing a few things solo, did you feel confident to make a full length?
Well I had the record put together and was working on it as I was releasing those little odds and sods, so my original intent was to release a full record first, it just didn't quite work out that way.
Who contributed to helping you with “Resolutions?"
Ok it's a hell of a list: Pete Steinkopf of The Bouncing Souls, produced, engineered, mixed and played some guitars. Brendan Hill, who I played with in The Curse played drums and percussion, Michael Cotterman (Loved Ones, Title Tracks, Kid Dynamite) played bass, Chris Gonzalez (Loved Ones, Explosion) played guitar, my sister Melissa Hause played piano and B3, Mitch Townsend (Matt Costa, Red 7) played guitar, mandolin, and lap steel, Chris Wollard (Hot Water Music) and Ericka Hause (my wife) both sang on the record.
You are releasing the record on Vinnie from Less than Jake’s Paper and Plastic label, how did you link up with Vinnie?
I met Vinnie when The Loved Ones toured with Less Than Jake in 2006. He had just sold his half of Fueled By Ramen and was talking then about starting a label, and I've always been impressed with his acumen and work ethic. I spoke with a lot of labels about releasing Resolutions, but with Vinnie I felt the most comfortable and the least boxed in.
Do you feel that working on your own is better, worse or just too different than doing things with The Loved Ones?
It's just two different things. I'm fortunate to have people care about either thing, a lot of great writers and players labor away with no one paying attention, and I'll never take that for granted.
Will there be more Loved Ones material soon?
Yes. I'm almost done writing the record and we're gearing up to rehearse and record.
When Brian Fallon of Gaslight Anthem went on his first solo tour in early 2010, you went along for the trek with him. What was it like touring together? Just two guys who front two bands breaking away for a bit?
It was great fun. It was he and his wife, me and my wife, a room full of people and 2 friends with some songs. We're planning on doing another big tour in the UK and Europe later this year, it's going to be a blast.
Kanye and Jay-Z are doing a record of duets together; will we ever see the same from you and Brian one day?
We don't have any plans to do anything like that, but who knows?
Who would be someone you would love to write and record with?
Hands down, immediately #1 answer is Patty Griffin. I'd love to make a record with Mike Mogis from Monsters of Folk and Bright Eyes as well.
Through the years you have also linked up with some fine artists like Bouncing Souls, The Hold Steady, Hot Water Music and others. Do you feel you have all built a community and friendship around the music that you play and process you use to make it?
Absolutely, it's great to operate in a world where we all respect and love one another, there are so many horror stories about competitiveness and jealousy in the music business, I don't think that kind of stuff helps anyone.
BURNING QUESTION: One tour I would love to see will be The Loved Ones, The Hold Steady and The Gaslight Anthem. Any possibility we can make this happen?
Anything is possible. Those two bands are pretty popular right now, so you'd have to ask them if they'd do it. We'd do that tour in a heartbeat.