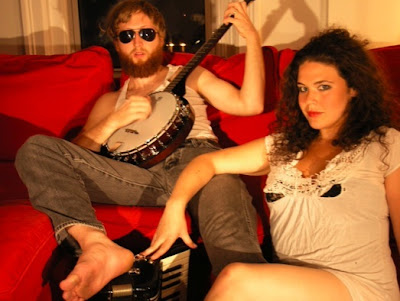 Art is a funny thing, it has this ability to make people dream, wonder, inspire and most of all allows for an outlet of endless possibility of passion to be displayed. Art is what moves us and what shapes us, it is our greatest necessity and sometimes can be our own worst enemy by being a central driving force of passion and courage and could either lead to great acclaim or epic failure. For the husband and wife band, The Bengsons they are taking their art and presenting it with a vengeance. As I said in May after a review of their gig at Mercury Lounge, they are a cross between "The Dresden Dolls meets Gogol Bordello meets Annie Get Your Gun," it is a statement and comparison that holds more truth than you can imagine. It is vaudeville - gypsy rock with an edge and for that, they have become one of the most talked about bands in New York City today. In an exclusive interview with Shaun and Abigail Bengson we discussed everything as to how they came about, working together and even did some teaching in South Africa and Shaun explains what the hell a Zombie Nationalist actually is. Take a look at my interview with The Bengsons below.
As a husband and wife duo, is it difficult being in a band with your significant other?
Abigail: It is actually really joyful. We really enjoy each other's company... and I love his art. We do have to be aware of when art/business time is over and try to REALLY stop and just be together... which can be tricky since we could theoretically always be working and creating whenever we're both in the same room.
We have seen many husband and wife duos on the rise in present times from Hank and Cupcakes to Tennis and of course yourselves, you do think it is a new way of showing love and passion for couples?
Shaun: For us it has been a really wonderful and unbelievably fulfilling experience working together, and we couldn't imagine doing it any other way. As far as music couples in general goes, I suppose there are all sorts of strengths and challenges that come with the experience. We have two very dear friends who perform as a husband-wife duo, and both of them were married before to non-musicians. The wife of that duo has long told me that “musicians have two choices, they can marry a musician or get a divorce!”

When did you both decide to start the band?
Abigail: oo lala...on what became our first date! Shaun invited me to learn some of his tunes...which in retrospect sounds a lot like asking me to see his etchings...we sang together...kissed, and were engaged and fully in-da-band about three weeks later.


Is it just the two of your or do you have hired guns play with you on stage or in the studio?
Shaun: We started out exclusively as a duo, but as what we want to do grows more ambitious, we've begun to build a roster of fantastic musicians who play select shows with us. Many of our recent shows have featured a full blown 7 piece band featuring musicians from as far apart as Ohio, Indiana, NYC, and Maine (special shout out of thanks to Bart, Eric, Zach, JJ, Shawn, and Dan!). As we are a family band, one person we have been very excited to work with is Abigail's sister, Annie, who has sung with us at many of our recent shows on the East Coast.

Your music is vaudeville meets folk and is a ton of fun. How do you come up with the songs and ideas?
Shaun: Thanks for the kind words, Sal! As far as the lyrical content goes, a lot of the songs we wrote over the past year was as part of an experiment we were doing where every town we went to, we would try to learn a story from someone there and turn it into a song. That experiment eventually turned into our theater piece, Ain't That Good News. Musically and melodically, we find it's very difficult to set out with an idea of what the song should sound like, so writing the music tends to be very inspiration based. We write almost everything together, from the ground up, which is a very satisfying but emotional experience as we both care about it so much.

Is anything ever a concept?
Shaun: Yes, absolutely! A lot of the music we write, we also develop for theater, so we tend to have a couple of arching concepts going at any given time that feed into projects. The project we are working on now is this large scale opera.

You come from art backgrounds, have you ever thought about doing a musical featuring your music?
Shaun: Actually, about half of what we do is theater. We have written two musicals/theater pieces, The Magic Show: The Story of The Barefoot Angels, set in El Salvador, and Ain't That Good News, a cabaret/storytelling piece. We are currently working on our most ambitious piece yet, an opera called The Proof. About half of the songs on our new album (also called, The Proof) are in the opera. It's a large cast, multi-media experimental work and we are currently workshopping it for two weeks in Seattle with the very talented and awesome Satori Group.

You recently were in South Africa working with theater groups there. Tell us about your experience and what you did?
Abigail: We split our time in a few different ways...we worked with some youngsters in the townships there and also spent some incredible time creating with the brilliant young artists in the Market Theater Lab. The art that is happening in ZA is completely incredible right now.

Shaun: South Africa is a really crazy and beautiful place of the wildest contradictions and juxtapositions. It has people both living in unbelievable wealth and unbelievable poverty. The legacy of racial conflict is still so recent, we are only now seeing the first generations of kids who grew up not knowing apartheid and even then, the vast majority are living in the slums of the townships. Even so, we were met with unbelievable kindness, warmth and strength and a lot of the music was among the most inspiring and beautiful I've ever heard.

Did the country and its people inspire any new tunes?
Abigail -OH YEAH! We wrote a few tunes there actually and we continue to inspired by our friends and their stories there... we had a great moment when we were working on a tune sorta inspired by AIDS prevention and we asked our South African composer friend, Bongani Magatyana, how he handles the topic in a sensitive way with out being too didactic... he said “it's easy!” and sang his song, “Coooondomise Cooondomise abstain be faithful one round one condom every time!” ha! brilliant!

Aside from music and art, charity is an important subject and topic for you to lend your talents. Do you feel any type of voice you can give to a topic will raise awareness to cause?
Abigail: it's difficult for us to separate our art from our...um...activism. They are pretty entwined for me. I guess it's not so much about charity as much as we're really moved by a lot of different kinds of people, and are blessed enough to get to work with and enjoy collaboration with folks from a lot of different kinds of communities. Our music is a reflection of the people we love, the situations that piss us off, and our real desire to offer something loving/silly/revolutionary/sexy/sweet to the world. Also... and this is maybe harder to define... we really want EVERYONE invited to our party, you know? We like to say that our shows are for the freaks and weirdos, or the people who secretly feel like freaks and weirdos... we are all crazy, and we can all have a home with each other.

You have traveled around so much before settling in Brooklyn, have your travels inspired your work? Has Brooklyn inspired you?
Shaun: Yeah, we absolutely find inspiration everywhere. So much of our lives involve traveling, that inevitably the different places and homes we find ourselves in work themselves pretty deeply into our psyches. Brooklyn itself is incredibly inspiring, in all its glorious diversity of people pushed up against each other. Its also in the midst of such an artistic boom. Now that the artists have mostly been priced out of manhattan, its really the boroughs where things are happening, Brooklyn most of all.

"100 Days" by The Bengsons @ 92YTribeca from Andrew Lazarow on Vimeo.