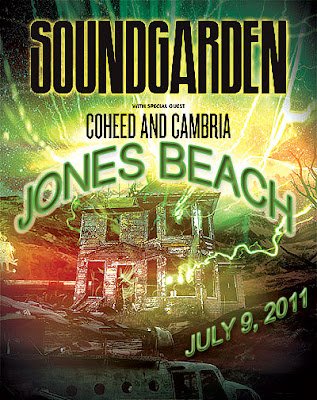 After a thirteen year hiatus, three shows done in 2010 including a headlining slot at Lollapalooza 2010, Soundgarden kicked off their first official tour earlier this week and the fourteen year long wait for most fans is finally over. The band made their way back to the New York metro area this weekend for the first time with this reunion tour. The sixth stop was at the beautiful Jones Beach on what turned out to be the perfect summer night.
It was a generational mix of fans as old classic rock loving men mixed with metal heads, Gen X and Gen Y'ers as the 90's came back alive and everyone remembered when grunge was king. Opening with "Searching with my Good Eye Closed," Chris Cornell, Kim Thayil, Matt Cameron, Ben Shepherd reinvoked the power and thunder that fans have loved them for all these years. It was a trip down memory lane as the band are reintroducing themselves with their back catalogue of singles, B-sides and very deep early cuts and in a set list that appealed to the casual listener to the hardcore fan, Soundgarden were not ready to play any of the new material they have been working on and they didn't need to, they stuck to the working wheel of high octane, dark and murky rock and roll. "Jones Beach, sorry for the wait! We got some new songs but you won't hear any tonight, this is an old song" a bearded Chris Cornell told the crowd right before kicking into "Jesus Christ Pose" and it was at that moment, the crowd could care less about new material and were chomping at the bit for obscure songs like that. From there they launched into "Blow Up the Upside World," "My Wave" and "The Day I Tried to Live." Yet, the true highlight of the night would be when Cornell jumped into the audience to sing the old gem, "Hunted Down." Cornell seems to be a man of the people and that is why his career as a musician, whether solo or when he fronted Audioslave was so successful despite poor critical reception. He strolls around stage very relaxed and very much as a true leader, when he opens his mouth, the power that erupts from his throat seems as if he is not even trying, it is a sight of wonder. Drummer Matt Cameron now is facing double duty as not just the drummer in his original band currently but for the past 14 years he has been the backbone of Pearl Jam's sound. While guitarist Kim Thayil and bassist Ben Shepherd have been out of the limelight all this time, they seemed to have not lost their touch. In a two hour set it was what fans have been waiting for. "Jones Beach, we will be back soon! We promise and with new material" Cornell said at the end of the night and it is at this point fans are now chomping for that new material they deserve.
Opening the show were multi-rock genre appealing Coheed and Cambria. Unlike their intensely long headlining sets, Coheed had to knock their set down to 45 minutes but delivered in such a way that the cult legion of fans were kept happy and curious ears were transformed into immediate fans, for instance I overheard someone behind me say "I never cared about this band before, but wow, now I am!" It was a rip-roaring short but sweet set that had singer Claudio Sanchez bending down wielding his double neck guitar over his head as he shredded along. The magic of Coheed and Cambria is in their live performances. Just witnessing what they did in Brooklyn last month was enough to keep me wanting to go back and see them more and more. Closing with the epic "Welcome Home," it was a testament as to why they were asked by Soundgarden to be the first band to opener their welcome back tour.
Soundgarden Jones Beach 7/9/11 Setlist:
Searching With My Good Eye Closed
Spoonman
Gun
Jesus Christ Pose
Blow Up the Outside World
My Wave
The Day I Tried to Live
Ugly Truth
Hunted Down
Fell on Black Days
Rusty Cage
Outshined
Beyond the Wheel
Black Hole Sun
Burden in My Hand
Superunknown
4th of July
Encore
Hands All Over
Loud Love
Like Suicide
Slaves & Bulldozers
Posted by Salvatore Bono at 6:55 AM