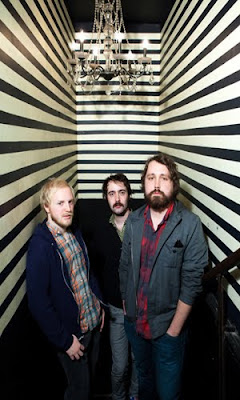 It was just last year when we were running around Grant Park in Chicago for Lollapalooza when we accidentally came across Knoxville, Tennessee's Royal Bangs. The intense three pieces delivered a sucker punch set and we have been hooked since. With their latest release, Flux Outside on the brilliant Glassnote Records, Royal Bangs have been getting the attention they deserve and it is now no accident that how people have gotten to notice them. They are a unique rock and roll three piece outfit that combines southern rock inspiration, various aggressive hooks and manage to incorporate it with keyboards and have fans around the country jumping to their favor. In fact, Black Keys drummer Patrick Carney first took notice of the band and signed them to his label, Audio Eagle Records in 2008. Royal Bangs have been slamming through clubs but are ready to break down the walls with their big sound that can fill any arena. In an exclusive interview I spoke to guitarist Sam Stratton as we discussed the bands sound, recording Flux Outside and how the festival experienced has changed them. Take a look at my interview with Sam below:
When the band formed six years ago, did you think you would be three albums in at this point?

I didn't really project anything distinct for the band that long ago. I knew we all wanted to making music at an early age and devote a lot of time recording it. We're all studio nerds; if we didn't tour all the time, we'd have more than 3 records.

What was it like recording Flux Outside? Has anything changed within the band as far as songwriting and recording goes?

There is a major distinction between our previous albums and Flux Outside. The past records were more or less a collection of songs that we had made whenever we were home, but these songs were written in the same 3 month period. We made them to compliment each other and represent a complete work. The production quality has progressed. We've learned a great deal and found the right people to work with. We didn't have to duct tape mics to stands, sweat in storage units, or relieve stress with spontaneous fireworks
parties.

At one point there were five guys in the band, now you are a tight trio that produces such a big sound. Do you utilize more musicians in the studio now?

Nope, just the 3 of us. We can all play all the instruments. Some of us are way better at specific ones.

How do you managed to recreate the sound you do in the studio live on stage?

It took a lot of work. The record is so dense and we did so much with the mixing. Ryan has invented a lot of unique ways to route the signals and reproduce the strange sounds we made. The live show IS different. Some songs are have been rearranged to make more sense and they are really fucking loud.

Your live shows are overwhelming and intense, how much of a strain doesit take on you night in and night out to do what you do?

Zero. I love it. We all wanted to do this since we can remember and we are grateful to perform. After recording, performing live is our favorite facet of music.

Since you have toured so much, where are your favorite places to play?

We love NYC. We seem to be there regularly. Chicago, Austin, and especially The Pilot Light in Knoxville.
Last year we were introduced to you at Lollapalooza. What was that experience like?

Lollapalooza was the best festival experience we've had yet. The crowd was really into it, we played well, and Grant Park was beautiful. I met one of my heroes, Dave Longstreth of Dirty Projectors, and had a super awkward fan moment.

How different is it to play a festival to a majority of faces that have never heard of you before as opposed to headlining shows where fans are coming just for you?

I have a kinda have the same experience at a lot of shows. I don't know if that is good or bad. I get into it and sort of lose touch. It seems that when people come to a show purposely they are more inclined to enjoy it and have more interest, higher energy levels, higher blood alcohol levels, etc.

Many bloggers and critics try and pinpoint your sound yet; their comparisons never seem to work. How would you describe Royal Bangs to someone who has never heard of you?

That's just what it is, I guess. The things people hear in the music can be so disparate that it ends up being pretty comical for us (celtic, southern, asian beard, afropop blues, surf, punk, prog). It's loud indie rock. I can't really make any comparisons either.
Posted by Salvatore Bono at 8:02 PM