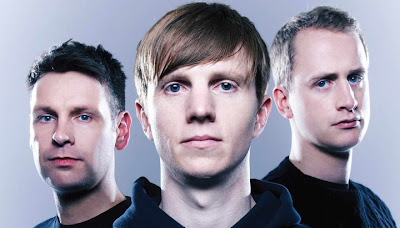 Strange things will happen when you believe in yourself and pursue what you adore. Just ask any band or artist that has cracked it in the big time or just ask anyone who simply loves what they do. For three friends from Northern Ireland; Gary Curran, Declan McLaughlin and Gareth Donoghue they were each DJ’s on their own in the Irish club scene, in 2006 they banded together and formed Japanese Popstars, a group that has taken them from the dance floors of pubs and clubs in their native country to jet setting around the world at major music festivals and working with their idols.

When we think of Irish bands here in America it is the immediate subconscious of bands like U2, The Pogues, Cranberries, Frames, Snow Patrol and the list goes on. However, as of late there has been a deep electronic movement going on in Ireland’s major cities that has been showcased in bands like Two Door Cinema Club and now the techno beat makers of Japanese Popstars. “There is a big underground techno scene in Ireland that has been influenced by the rest of Europe especially Berlin” Gareth tells me as I sat down with the group at EMI’s New York headquarters for an interview with the men. “Irish people enjoy a good time and a drink, there are plenty of pubs and places to dance, so this was a way to get involved and do something” Declan told me. The band got together after Declan and Gary attended a music festival and in a drunken idea in the grass they decided, “what if we formed a band and came back to this festival next year for free!” Declan said, after thinking about it long and hard after that particular festival, they invited Gareth to join and the group was set. It was Declan who came up with the band’s peculiar name, “I always have had a fascination with Japan, and figured if I started a band with a name like that, people would misbook us and we can go and play in Japan,” not a bad idea and in case you were wondering, the band has in fact played Japan, but on their own merit not because of a mishandling. For a band that formed on the outskirts of Belfast, their timing was right, “Once the guys in Two Door blew up, there was an interest in Belfast from record labels. It wasn’t like it used to be where you would have to go to London to get noticed, so we pushed ourselves,” Gareth says.

Japanese Popstars after all are an electronic outfit, they had to push as hard as a rising band, however, with the way technology has evolved, almost anyone these days can make beats and make remixes, the genre has become so accessible and making the market that much more competitive and difficult. “It was people like Daft Punk, Deadmaus, Chemical Brothers, who opened the door for electronic music to be as massive as it has become. I think its brilliant and exciting,” Gary says of the roar and rise of electronic acts emerging today, but Declan puts it in check by saying “It’s quality over quantity. So many people start their own labels and invest in the gear, studios and have no money to promote themselves and no means of exposure and never get heard.” With electronic music being as available and having so many subgenres, the music can appeal to every range from pop radio to a pretentious hipsters iPod. “Record labels really started taking notice to how big it has become, people like Dave Guetta really showed you can make serious money in the commercial market and then having rappers and hip-hop guys come on board, its massive now,” Gareth says. The guys in Japanese Popstars kept pushing for their dream and pushing for what they had and began to turn heads, including that of Tom Smith of Editors who asked the band to remix his band’s smash international single “Papillion.”

From their remixes to their acclaimed debut, We Just Are and driving work ethic, Japanese Popstars went from making a name for themselves in their own country gigging on the weekends to quitting their day jobs and making a name for themselves in Europe and now the rest of the world. Their latest album, Controlling Your Allegiance, was released in June via Astrelwerks and features a slew of guests from Tom Smith, Robert Smith, Jon Spencer, Green Velvet, Lisa Hannigan, Morgan Kibby of M83 and James Vincent McMorrow. When I asked how they got all these stars on their sophomore release, Declan jokingly stated, “We stayed outside their houses!” Though the truth is that they came up with a dream list and between their contacts and managers perseverance these singers came through and really become the centerpiece of the record’s story telling. “For our first album we wanted just us, we always wanted a vocalist but we wanted to show off who we were, so for this album it was something to experiment with. We approached Morgan Kibby first because we are huge M83 fans and love her voice, once she said yes, we came up with a list and just kept asking,” Gareth says. “I am still in disbelief, next step is to try and bring them on stage with us” Gary noted. While the Japanese Popstars are designing their dreams into reality, they are proof to the old theory that if you work hard and want something bad enough, it will happen. When I asked if they consider this work, Gary and Gareth replied with a quick “No,” but it was Declan that said, “yeah, its work. I have a job to do and this is it, it may not be a traditional job but it’s a job, one that I love and glad I have and I want to be the best I can be.” Gareth mentioned at one point “All we want is to write the best we can. The rest is out of our hands.”
Posted by Salvatore Bono at 7:48 PM