No Devotion, the new band featuring Geoff Rickley of Thursday and ex-members of LostProphets, will release their debut EP, 10,000 Summers later this month.

In his new book, Chapter and Verse, Joy Division / New Order guitarist Bernard Sumner claims he hypnotized the late Ian Curtis from his "death wish," just a couple weeks before taking his own life. In a recent interview with The Guardian, Sumner went into more detail about the event and said, "I first read about hypnotism at school and I used to do tricks like getting a really skinny guy to arm wrestle the local bully. Much later, when we were in Joy Division, I read a book on hypnotic regression and how it could be used for therapy. I first hypnotised Ian at our rehearsal room. He remembered nothing, but when we did it again exactly the same memories came up, about him being a mercenary in the Hundred Years War. I recorded it and when I played it back to him he was astounded. It was my feeble attempt to try and shake him out of a death wish he seemed to have. He’d already tried to commit suicide. I’ve never listened to the tape since because it was too tender, but I decided to have it transcribed and put it in the book. Otherwise it would be lost forever."

During the week of October 13, David Letterman's favorite band, Foo Fighters will hold a residency and perform cover songs each night on The Late Show. Each night, the bands selection of tracks will come from songs that inspired their forthcoming album and HBO series, Sonic Highways. On October 13, Dave Grohl will sit for an interview with Letterman to talk about the series and new album.

Speaking of Dave Grohl, he recently paid a visit to The Cribs who are in the studio working with the iconic Ric Ocasek on their new album. The band posted a photo of everyone on Instagram, take a look: 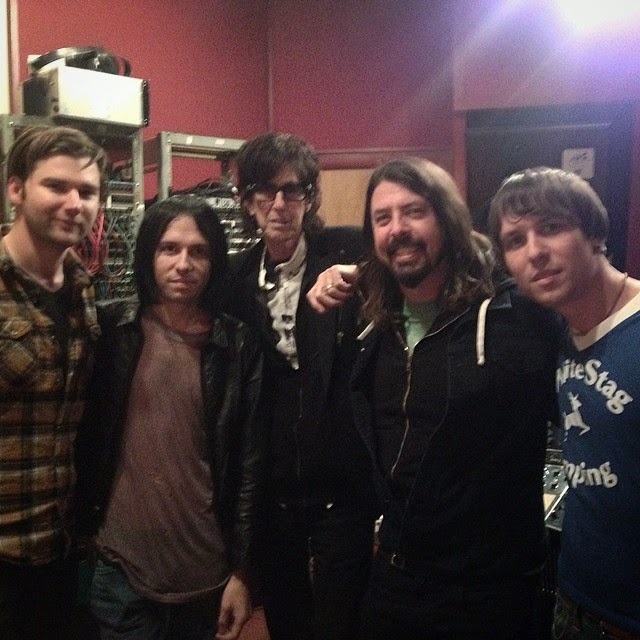 Posted by Salvatore Bono at 4:15 PM