Speaking to Q magazine, Prodigy's Liam Howlett spoke about the band's forthcoming album. While it still does not have a release date or title, he pretty much declared it a game changer. He said, "Dance music across all types has become formula-based. It's 'Here's your drum fill, here's your build.' All that DJ bollocks and tutorials on YouTube shit. This album is totally organic. Pure violent energy."

Following the death of Jack White keyboardist and pianist, Ikey Owens, Queens of the Stone Age ivory tickler Dean Fertita has joined White's band. It seems at the moment, he will be in both bands.

Soundgarden will release Echoes of Miles: Scattered Tracks Across The Path, a three-disc retrospect of that features unreleased material, B-sides, demos, covers, live cuts, that acts as a retrospect of the band's near 30-year career. It will be released next month.

Speaking to The Fader, Jamie xx gave details about The xx's new album. The English ambient trio are currently working on their third record in Iceland and Texas. Jamie said, ""We've got quite a lot of songs that are not finished, but I'm excited about it. It feels a lot more free than when we were making the last record."

Jamie xx then confirmed that he is currently in the mixing stages of his solo debut. No word on a release date was given during his interview with The Fader.

Black Rebel Motorcycle Club are turning to fans to help their drummer, Leah Shapiro, who has to undergo brain surgery called  Chiari malformations surgery. The band have cancelled all dates and have set up a GoFundMe page that reads, "Leah has a serious medical condition requiring brain surgery and months of recovery. Many of you have asked what you can do to help support her and help her get through this, and I think we should all put a dollar in the motorcycle helmet and pass it around. Motorcycle club members always help out fellow members and especially the President of the club, good heavens! All donations will go towards Leah's surgery and recovery."

Following the announcement that Beady Eye have split, Liam Gallagher will make his first live appearance alongside The Who next month at the iconic rocker's Teenage Cancer Trust shows in England.

For the first time in eight years, Tool have confirmed they are working on a new record and posted a picture to prove it. Take a look: 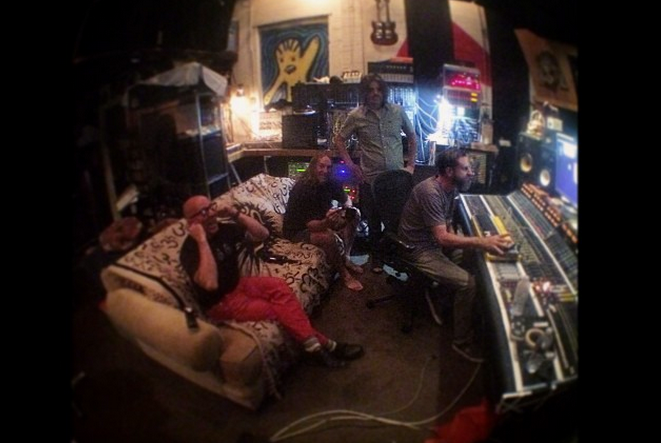 David Guetta has released the tracklisting to his upcoming album, Listen. Take a look at the star-studded listing below: