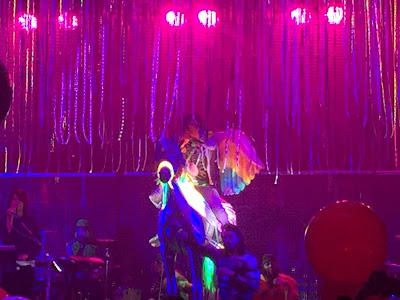 Those listed about with the exclamation marks are just some of the ingredients to The Flaming Lips' current stage show. The fearless freaks from Oklahoma made their way to New York City as they are on the road in support of their new album, Oczy Mlody, which arrived in January.

The band are no strangers to embracing their weirdness and love for theatrics that their concerts actually make you feel high without ever having to take a drug. With their homemade costumes and never ending supply of props and visuals, the beloved band brought their new album to life for the first time in Manhattan.

Opening with "Race for the Prize," then going straight into "Yoshimi Battles the Pink Robots, Part 1," the smile from the fans' faces never left for the hour and 45 minutes they were on stage. Songs like "There Should be Unicorns," "Pompeii," "The Observer" and "How???" kept delivering punch after punch of psychedelic love and sound.

Aside from the props and lights, the highlight of the show came when the band played David Bowie's "Space Oddity." As the Lips were on stage doing one of the best covers to the classic, singer Wayne Coyne put himself into his signature inflatable ball and walked across the audience to a smaller "B" stage between two inflatable mushrooms and sang the song as if he was the spaceman Bowie was singing about. 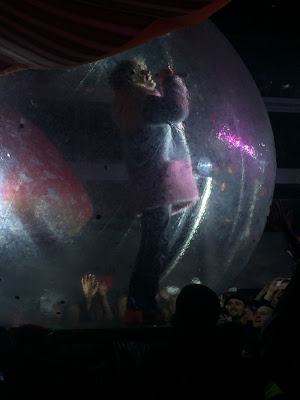 "We played that song for over a year since he died," Coyne told the crowd. "At some point over the summer, we were not going to play it anymore. He was gone for a few months now and we thought it was time to give it a rest but it found its way back into our set no matter how hard we tried...Now, we will always play Space Oddity."

The revelation that Coyne made about the song gave the performance a new dimension. He also explained that he never saw nor met Bowie, one of his heroes, and felt that performing the song would help keep him alive and for those that never did get to experience the Thin White Duke in concert, this could be something for them. 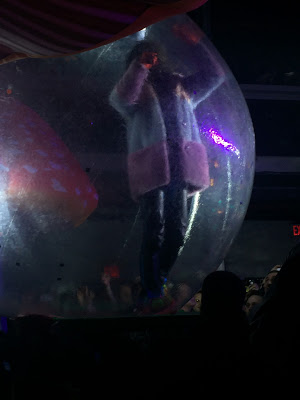 As the night began to wind down songs like "The W.A.N.D.," "The Castle," "A Spoonful Weighs a Ton," closed out the main set. Following a brief break, they returned with their epic closer, "Do You Realize?" Yet, the most touching moment came with Coyne explaining why their fans are the greatest and why they play the song each night. He addressed the fact that "someone in this room could be going through profound sadness and they have you to help them and this show to make them forget about their problems for a little bit." As the gratitude from his lips echoed across the massive room, the audiences smile widened as if it couldn't get any bigger and as the song helped settle everyone back to earth and reality, it made for a perfect end to a brilliant night.

The one thing about the Flaming Lips' carer which has spanned over 30 years, they have always been known for their live shows and how they can work a room. Unfortunately, a room like Terminal 5 is far too small for them. While it is intimate enough for lucky fans who got in, it is not big enough to carry their sound, show, and style. The bigger is better for the Lips. 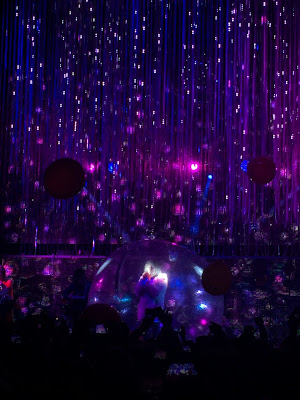 Posted by Salvatore Bono at 9:36 PM