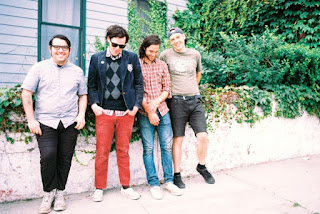 One of the fall's most anticipated releases comes from Philly punks Beach Slang. The band, who have been performing together for two years will release The Things We Do To Find People Who Feel Like Us next month.  As hype builds around the band and their debut, we spoke to frontman James Alex who gives us insight into the roller coaster ride of emotions and living out their dreams in our interview. Take a look at what he had to say below:

Your debut is one of the most anticipated of the fall, do you feel pressure that it needs to live up to the hype?

The release of this album has been a long time coming for your fans, what do you hope fans take away from hearing it?

I hope it's the exact thing they were hoping it would be. I hope it helps them get through something. I hope it lights them up. I hope we can scream along lots. I hope it makes things better.

What did you do differently on the album that you didn’t do on the EP’s?

The main thing, I suppose, was remembering this is a bigger listening investment. It needed mood shifts. It needed to evolve and stretch and stuff. On a four-song EP, you can kind of just full-throttle through the whole thing. That, I think, would burn out and super limp over ten songs, you know? So, yeah, there was a very considered curation (from writing to song selection to sequencing and etc.)  with this record.

The title of the record is something that really hits home with me and I am sure everyone else that has come out to your gigs. Does that title still resonate with you even being in the band?

I only know how to write things that resonate with me. I mean, if I don't feel it, how can I ask someone else to? So, yeah, when that line fell on me, I knew, straight away, it would be the title of this record.

What do you say to the fans out there that are doing whatever they can to find people who feel like them but are having difficulties doing so?

Keep doing it. Look, all the best things I have, the best people I know, all that stuff, none of it came easily. But there is real beauty in that struggle, in that searching. It prepares you. It expands you. And then, when those amazing things come, you're ready.

Hailing from Philly, how much has the city influenced you?

It's given us that blue collar, go-after-it thing. It's made us fighters. Philadelphia has this really romantic grit to it. And that's just sort of in our bones now.

You are a punk band but there are touches of new wave, cold wave, even indie. Who are some of your influences?

The Replacements, Psychedelic Furs, Joy Division, Magnetic Fields, Jawbreaker, The Smiths and Jesus & Mary Chain would be a pretty fair sum-up. But, yeah, I listen to almost everything.

The band are considered to be an indie-punk supergroup. Do you feel that way?

No way, not at all. We're skating by on dumb luck, clumsy charm and good manners.

Being in other acts before doing this, how does this compare to your previous work?

All that previous stuff bleeds in right? But Beach Slang is the most honest, most urgent of the lot. It feels good to dig in your past, but not get stuck there, you know?

The goal in being in a band is to write the best songs possible, do you feel that you have achieved that with this record?

Yes, these are the best songs I could write at the time I wrote them. That's a really satisfying way to feel. It's also really encouraging to know even better ones are coming.

Since the response to the band has been nothing but positive, how much fun are you having being in Beach Slang?

It's been pretty wildly alright. My guts are in a perpetual state of cartwheel, I swear it.