Seven years ago, Arcade Fire played two back-to-back sold-out concerts at Madison Square Garden, at the time, it was the crowning achievement for an indie band who were appealing to the masses in a city that embraced them and their unique style from day one. Now, returning to The World's Most Famous Arena, they are a different band but still full of surprises and energy.

The "Infinite Content Tour" kicked-off last week and quickly made its way to New York City where leader Win Butler claimed to the audience Tuesday night, "of all the shows on this tour, this was the place we were excited to play the most."


Listen to Our Essential Arcade Fire Playlist on Spotify

Just as the clock struck 9 p.m., the disco balls were lowered from the venues iconic ceiling and a de-facto boxing ring was illuminated in the center of the place as a nameless face introduced the band who walked out of one corner of the arena as if they were ready to battle in a prizefight. On their way to the ring / stage, they high-fived fans, smiled, and looked determine to give everyone inside the night of their lives.


Opening with one of their new singles, "Everything Now," the nine-piece Canadian ensemble threw a dance party for the ages with their thrift store special effects. As they roamed around stage and the drum riser rotated so everyone in the place got a clear point of view, they jumped right into "Signs of Life" and "Rebellion (Lies)," "Here Comes the Night Time," as they appealed to older fans. 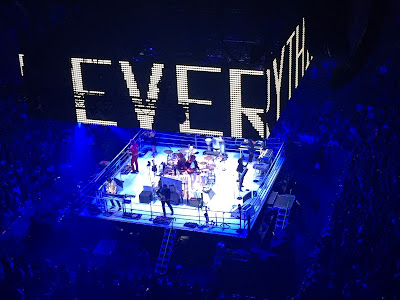 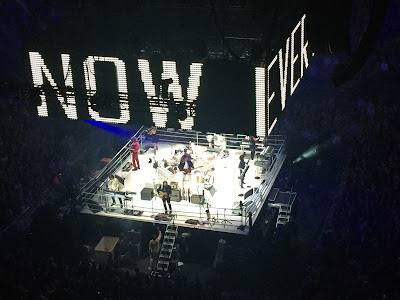 As the band barnstormed through their massive collection, Butler took time out to pay respects by those affected by Hurricane Harvey in Houston. "My brother and I grew up in Houston and they are going through a tough time right now because of the hurricane," he said, then addressing how the band could not be at the Hand in Hand Benefit which featured stars like Stevie Wonder, Oprah, Cher, and George Clooney, he asked for everyone to donate to cause and help those affected by Irma and Harvey before they jumped into "The Suburbs."

As he and his wife, Regine Chassange, traded lead singer duties through the night, they and their ensemble kept the energy high and brought some of the middle of the road tunes from their latest record, Everything Now, to life but made them pack a punch. Songs like "Electric Blue," "Infinite Content," "Creature Comfort," sounded brilliant in a massive arena, which has become the M.O. for a band that has cut their teeth on the road and their free-for-all live shows.

Easily, the highlight of the night was when they saved the best for last -- inviting the prestigious Preservation Hall Jazz Band from New Orleans on stage to join them for an unforgettable version of "Wake Up" with a bit of Ben E. King's timeless masterpiece, "Stand By Me," thrown in.

At points in the night, Chassange would leave the stage on occasion and dance in the crowd while multi-instrumentalist Will Butler would run around banging a drum or saluting fans. Backup dancers would arrive and dance in Caribbean attire on stage in the crowd and everyone played triple duty working the room and their instruments. At times it was sensory overload but that is the everything now they were talking about.

Opening the show was Preservation Hall, who are making a rare outside of NoLa tour, and while they played to a small amount of people inside The Garden, they sounded as perfect as they do in their tiny Bourbon Street room. If you have ever seen Preservation Hall, you know the band gets very intimate and personal during the shows, on Tuesday night, it was all about the music and the chops they got and proving they are not just the best band in The Big Easy, but the best band in any city they play in. 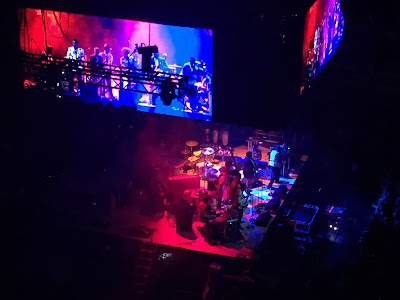 Also opening was hip-hop pioneer and icon, Grandmaster Flash, who suffered a series of technical difficulties during the first part of his set cutting his time very short. But the Grandmaster being the legend he is, used his time wisely and worked the room playing a series of songs in tribute to the musicians we lost like David Bowie, Prince, Whitney Houston, Rick James, and Michael Jackson. 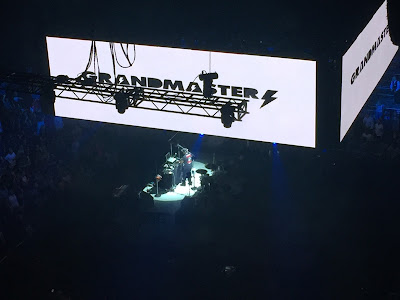 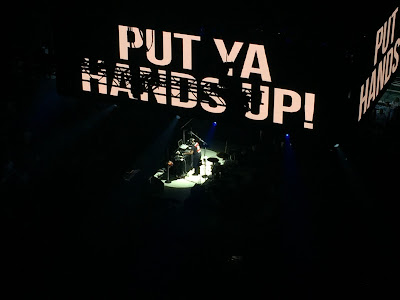 Posted by Salvatore Bono at 7:36 PM