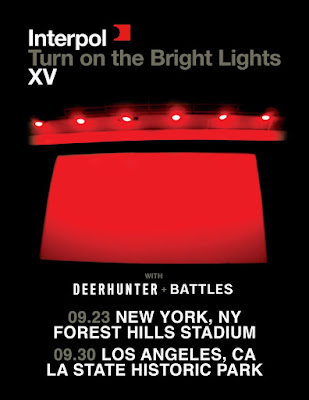 After touring Europe for the summer celebrating the 15th anniversary of their landmark debut, Interpol turned on the bright lights for a hometown show of sorts in Queens, New York.

As fans packed into the historic Forest Hills Tennis Stadium Saturday night, the slick indie rockers from the Lower East Side were in high spirits to play the record that not only launched their career but also show that New York City still had something to say in the music world following the attacks on 9/11. The night before they performed a much more intimate setting and familiar one at that as they sold-out Bowery Ballroom in a last minute warm-up show marking the occasion the first official time the band performed Turned on the Bright Lights in full in the city.


Listen to Our Essential Interpol Playlist on Spotify

Saturday was bigger, broader, and much more of a spectacle as it was the largest venue the band have headlined in nearly a decade after they were topped billing at Madison Square Garden following the release of Our Love to Admire. As the years went on, the band went through lineup changes as bassist Carlos D. famously left in 2010 and the had a handful of sub par records before really returning to form with 2014's El Pintor. Yet, Saturday night wasn't about their future or how they "returned" it was about celebrating their past.


As they walked on stage nearly a half hour than when they were estimated to hit the stage, Interpol strutted in their signature black suits, and performed in front of a backdrop that resembled the one on the cover to Turn on the Bright Lights. As they started with "untitled" and then brought it all the way through from start to finish with "Leif Erikson," the fans inside, now, like the band and music, older and wiser, were reliving a special part of their lives and what this record means to the cannon of New York City rock and roll. Everyone in attendance chanted back every word and held their attention this special occasion as they focused on the show, though expected at a concert is something rare to see in 2017. 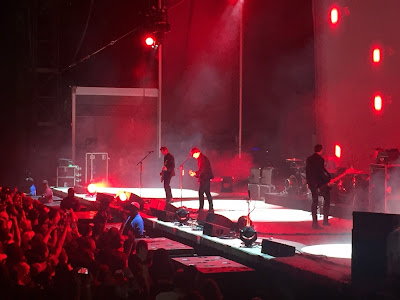 "This song was always clumped into the Turn on the Bright Lights songs, so we are gonna play it," a bearded Paul Banks said as soon as they finished playing their infamous debut and jumped into "Specialist," a B-side written during the sessions of the record in Connecticut 15 years ago.

After a brief break, the five-piece came back on stage and went into "Not Even Jail," "Slow Hands," "Lights" and the fantastic "All the Rage Back Home." Banks looked at his watch and the band seemed ready to play another song but due to a strict 10 p.m. curfew, they were cut short. Allegedly songs like "Evil" and "The Heinrich Maneuver" were slated to be played but had to be axed due to time. It seems as if they shot themselves in the foot going on stage later than expected, however, for everything in attendance it wasn't about greatest hits or a regular Interpol gig, it was celebrating a record that helped define a city in crisis.