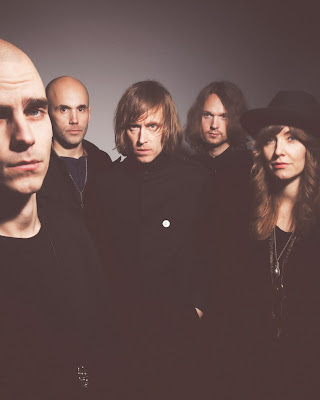 Last year, after Swedish hardcore legends Refused spent a year on the road in support of a reunion tour, by the time 2012 came to a close, the band announced they were breaking up -- again. On the announcement that they were again splitting, they mentioned that singer Dennis Lyxzen was going to work on new music with his band INVSN. Lyxzen, who spent time fronting The (International) Noise Conspiracy and worked with The Bloody Beatroots, and various other projects in the long time Refused were gone, also had INVSN in his corner. A band that has quietly emerged from Lyxzen's creative mind. As INVSN currently tour North America with Minus The Bear, we spoke to Lyxzen about his work with INVSN, Refused, and everything in between. Take a look at our interview with Lyxzen below:

From Refused, (International) Noise Conspiracy, INVSN, and even work with Bloody Beetroots, what is it like to constantly evolve?

It is just a part of life. People that never evolve or challenge themselves never create good art. I’d rather try and fail and get back up again than play it safe and just stick to a formula. For me this has been everything – life, music and art are all connected and if you don't take it seriously why should other people?

What is it about INVSN that has not fed your creativity before?

I think it’s more a matter of the different components of the project such as the people that you play with, the sounds that you are creating and the way you sing or write. With INVSN we are trying yet another approach - different textures and movements. Even though some of the music might be rooted in the past, this is still new to us and it is still a challenge to do it our way.

How did this project come about?

The core members of INVSN have been playing together in different constellations for some time. A couple of years ago we started dabbling with post punk and more new wave oriented ideas. That lead to a record that we released in Sweden 2011 singing in Swedish. That record caught the attention of Razor and Tie, which lead to us being signed to an American label and the new band name.

You are dabbling now into indie rather than hardcore or punk. When you did this, did you think your fans would be accepting of the new sound?

If they are fans of me and they are actually interested in what I am doing as an artist and musician, I do hope so. If they just love Refused it might be hard for some people to swallow. Honestly, it is not something that we ever think about when we create. The only person that you have anything to prove anything to is yourself. The minute you start worrying about what other people think, you will end up becoming a blurry mess instead of a proper artist! Also, with the background of this band, we hardly have to sport our punk credentials. Between us, we have a “punk past” of thousands of shows in basements and squats. We have released about 50 DIY punk records on small labels around the world and we have a collective punk experience of something like 200 years! Ha.

You moved to Razor & Tie and changed the name to INVSN, how has everything been thus far?

So far so good! We are a new band with new music and it’s like starting over. But the reviews so far have been great. We got money to record a record. We are on tour in the states. Can't really complain!

What was it like getting off the massive Refused tour and then heading into the studio with this project?

It was fine. Refused was great and it was a rewarding year in a lot of ways but maybe not that creative. During that entire year I was writing and practicing with INVSN to make this record happen. So coming off of a great year into the studio was perfect.

As much of a fantastic lyricist and singer you are, you are also one hell of a front man! How have the shows with INVSN been going?

They have been going really well. All music has a certain movement and energy to it, and we are finding that movement and energy after a couple of shows. New songs are always hard to get a grip on at first. Minus the Bear’s crowd is really nice and open-minded, so hopefully we’ve been able to grab the attention of a few people.

From all of your bands, which has been the most rewarding and why?

I find that the most rewarding projects are always the ones you are working with at the particular moment because it is happening in the then and now.

Last year Refused shocked the world with the announcement of the reunion tour and subsequent mind-blowing gigs around the world. Do you ever see the band ever getting back together again or is it done for good?

Who knows? I think that there are more then a few obstacles to overcome before we make another stab at it, but last year was great and we did have an amazing time so.... maybe?!

You have always been creating new music and sounds, aside from INVSN are there other projects in your pipeline?

Nothing right now. My hardcore band AC4 is recording a couple of songs when I come home from this tour and then we are playing a "final" show at home. But apart from that INVSN is the main focus.

Posted by Salvatore Bono at 8:48 AM