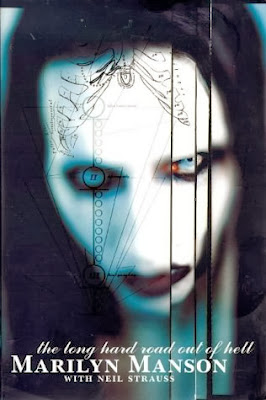 Before Lady Gaga and Miley Cyrus tried to outdo themselves and shock all of the media and audiences around the world, there was Marilyn Manson. Just like KISS and Alice Cooper before him, Manson was the reigning shock king of the 1990's and captured his vivid imagination, creativity, and brilliance in his 1998 autobiography The Long Hard Road Out Of Hell. Written and released when he was just 29 years old and at the top of his fame, Manson took readers from his Catholic upbringing to the world's biggest stages. From depths of personal despair to emergency rooms to the top of the Billboard charts, before he hit 30, Manson lived a life that people twice his age never experienced.

What makes The Long Hard Road Out Of Hell such a fantastic read is that Manson is incredibly candid about sexuality, relationships with friends and lovers, and his drug use. It is so well written that whatever people have ever written off about Manson was corrected and became and eye opening experience for the reader. If you were a fan of his or not, this is a read to check out and all of these years later, since he has retreated from the limelight more that he has before, it is a book to pick up now that many young starlets these days are just mimicking his antics.
Posted by Salvatore Bono at 3:56 PM