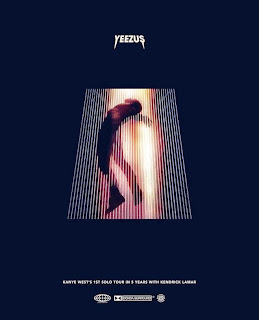 There are leaders and there are followers and on Sunday, November 24, Madison Square Garden showcased two performers that lead us, the audience, following their every move and hanging onto every word. Kanye West closed his four night New York City run of his current Yeezus Tour with special guests, A Tribe Called Quest, as the opener. However, it wasn't just Tribe the audience was getting, it was the "Final" performance from one of hip-hop's most iconic, groundbreaking, and influential groups.

Since the release of Michael Rapaport's 2011 excellent documentary, Beats, Rhymes & Life: The Travels Of A Tribe Called Quest, the status of the group was unfavorable to say the least. The film chronicled the band's history and through their 2010 Rock The Bells reunion, which hears leader Q-Tip saying, "Next time we get back together will be the Rock & Roll Hall of Fame." The group reformed earlier this year for Prince for his surprise SXSW showcase and then took a few offers to play on the European festival circuit this summer before doing their final Los Angeles show in August. Last month, when Q-Tip tweeted that they would be doing their NYC bow and final two gigs opening for Kanye on parts of his New York tour stop, the Yeezus Tour for the first time wasn't just about Kanye West, it was about Kanye AND the Tribe. Taking the stage just before 7:30, Tribe DJ Ali Shaheed Muhammed began spinning to his custom black, red, and green decks as Tip, Phife Dawg, and Jarobi stormed on stage to a screaming Madison Square Garden singing the opening lines to their classic, "Steve Biko (Stir It Up)." With giant screens behind Muhammed's DJ set that projected images of New York City, the history of the band, snippets of the documentary, it was something to use as crutch to entertain the crowd but was unnecessary, all eyes were fixated on the Tribe as they were dancing, jumping, rhyming, and getting the crowd going in the center of The World's Most Famous Arena. With classics like "Buggin' Out," "Oh My God," "Excursions," "Can I Kick It?" it was hard to imagine we were getting ready to say goodbye to them and these could potentially be the last time these songs are ever played by them again. So, to make matters much more special, as the group cranked into "Scenario," special guest Busta Rhymes stormed on stage like a Drill Sergeant to spit his verses.  During "Bonita Applebum," a dancer in full body paint resembling the covers to Low End Theory and Midnight Marauders, walked on stage holding a giant apple above her head and then her measurements (38-24-37). It was more than just a concert, it was a party, and as Q-Tip jumped into the audience and shook hands, crowd surfed, and was with the people, it was clear this was a moment. But, all good things, in fact, great things, must come to an end. "This is seriously our last show. Thank you for getting us started," Q-Tip told the crowd before the group embraced one final time in the center of the stage. After 50 minutes, they were written into the history books. While many, including myself, would have liked to have seen the legendary Tribe go out with their own headlining set, say at Radio City, Barclays, or the Apollo, they had to do things on their own terms and to go out at Madison Square Garden in front of generations of fans, what more could you ask for? 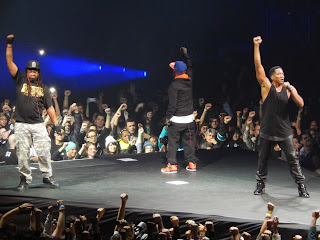 Not many artists could trump the "final" performance of one of hip-hop's most celebrated and loved groups, but then again, not many artists are Kanye West. The Yeezus Tour is much more than a concert, it is much more than a spectacle, it is an experience and production unlike any other. Unlike anything any solo male rap artist has done, Yeezus is the full scale production that artists like Madonna, U2, OutKast, Beyonce, are known to having. However, Kanye since day 1 wanted to put himself in that echelon and over the years he has. The Yeezus Tour has found one of hip-hop's most controversial, celebrated, and forward thinking stars outdo even himself. In his first solo tour in five years since the groundbreaking 2008 / 2009 Glow in the Dark Tour, Kanye returned to Madison Square Garden on his own to bring his new album to life. The show tells the story of West searching for a Higher Power and looking for life's answers. With a stage that resembles an iceberg then transforms into a volcano then into a mountain, it was enough special effects that would make Hollywood even want to invest in his tour. Wearing various costumes for different chapters of the performance, each with their own diamond and jeweled face masks that would make Damian Hirst envious, and featuring back-up "dancers" wearing various outfits that ranged from religious robes to full body stockings, Kanye was bringing art to the arenas. In a set that was Yeezus heavy, he managed to sprinkle in songs like "Mercy," "Clique," "Power," "Can't Tell Me Nothing," and "Cold." Yet, while the audience was screaming the words back to him, it was more than just a setlist it was a story told through his music. With pyrotechnics, a giant circular screen that projected images of the sky, the devil, white Jesus, Kanye rising from behind the mountain, the mountain splitting into two, the stage rising and sending him in the air like a god, Yeezus is not a show that you can put into words but something you must experience. However, Kanye West is his own devil and god. During the breakdown of "Runaway," he went on for a 20-minute rant about how Lenny Kravitz was the reason black musicians were allowed at fashion shows and then gave a backhanded compliment to Kravitz by saying, "The difference between me and Lenny Kravitz is I don't give a fuck." Then ranting about corporations and his problems with his label, fashion companies, businesses, and only Yeezus knows what else. While the audience was entranced by the show he was giving us prior to the now expected rants, many began to leave and boo him. It took us all out of the show. After he said what he had to say, he then broke into "Stronger,""Through The Wire," "Jesus Walks," "Diamonds," then went ranting again. Once again, taking us out of the story and the show. This time, it was shorter but it was a stain on a great evening. What people will remember from Yeezus now is not the setlist, not the music, not all of MSG coming together, they will remember the great set and the rants that clearly defeated the whole purpose of what the show was about. After two-and-a-half hours on stage, Kanye told us all to believe in our dreams and handed the mic to an audience member as he walked off stage. Yeezus walks with us. 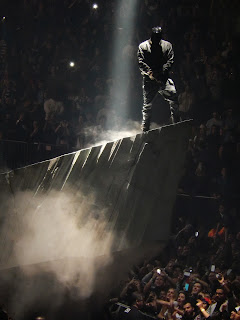