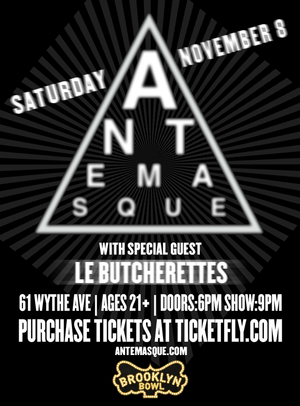 2012 was a bittersweet year for fans of Cedric Bixler-Zavala and Omar Rodriguez-Lopez. That year, it saw the return of their first band, At the Drive-in, but also the demise of their other outfit, The Mars Volta. Fans around the world questioned if this dynamic duo would make music ever again. Earlier this year, news broke that the duo have returned to working together in the form of Antemasque, a band that combines the post-punk flair of At the Drive-in and the psychedelic / prog-rock of Volta. As news started to roll out about Antemasque, fans got more excited as they learned Flea of the Red Hot Chili Peppers was involved in making their debut and it also featured Volta drummer Dave Eltich. While Flea was only a studio musician, he would be replaced on the road by Omar's brother, Marfred, on bass. Now, armed with a new album and new band, Antemasque began their world tour last week and made their New York City debut at Brooklyn Bowl last night.

"When they said we were playing a bowling alley, I thought we would be playing on top of three lanes and I would have to just buy them and set up the stage. Then, we got here, and (pointing to band mates) I kicked his ass, his ass, and his ass in bowling," Cedric told the crowd after ripping through a couple tunes. For a band, hearing that they are playing a venue like Brooklyn Bowl could be a bit jarring, yet, Brooklyn Bowl itself is not your typical bowling alley (the prices of everything there will confirm that), and Antemasque are not your typical band. Hitting the stage around 10:30, the band just kicked it into high gear as Cedric swung around with his mic stand like a poll dancer and Omar simply abused his guitar while the rhythm section just hit the crowd with a wall sound, Antemasque introduced themselves to New York. As fans threw their hands in the air, the band ran around on stage as if they were blind mice trying to find their way out of a maze. The energy coming from these four guys is almost unmatched in new bands emerging, this band of musical vets doesn't have anything to prove, yet they still think they do. Watching the live chemistry of Cedric and Omar is like watching Mick and Keith or Steven and Joe in their prime. Omar hardly used a pic as he finger plucked and thumped his strings leading to guitar solos and break downs that would even have impressed Hendrix. Cedric, in usual fashion, would crack jokes and lighten the mood between songs, yet, once the music started playing the beast inside him would awaken. As the band's hour-long set progressed, they moved away from post-punk and thrash to a more experimental sound that showcased more of what they could do as musicians rather than entertainers. If Antemasque is the start of the next chapter for Cedric and Omar, fans of theirs won't mind what happened two years ago in their other bands.
Posted by Salvatore Bono at 8:56 AM